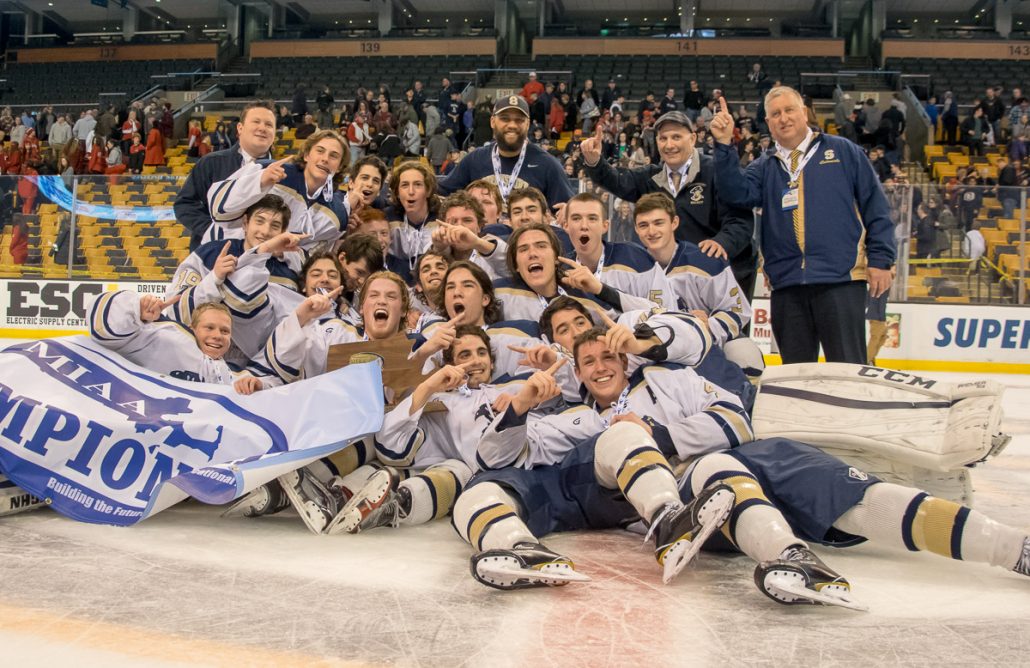 Shrewsbury won its fourth state hockey title with a 3-1 win over Old Rochester/Fairhaven in the MIAA Division 3 championship Sunday at the TD Garden.

It completed an undefeated season for the Colonials, who finished only one tie away (Wachusett, Feb. 22) from perfection in 24 games.

“I really was surprised with how poised we were,” Shrewsbury coach  Stephen Turnblom said after winning his second state title in four seasons. His team beat Hanover here at the Garden, 7-1, in 2014.

“We only have five seniors,” he added, “and we really weren’t that tight.” 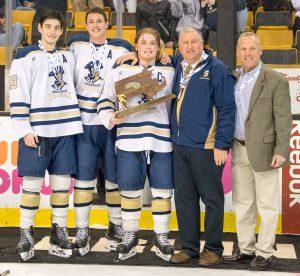 Shrewsbury opened a 2-0 lead after the middle period on goals from junior Liam Quinlivan and sophomore Tyler Borys. And in the final 15 minutes, they held off an all-out, third-period attack from the upset-minded South sectional champions, who were searching for their first state crown.

Despite being down, 3-0, early in the third, the Bulldogs didn’t quit. They outplayed and outshot (7-4) the Colonials in the third and got a goal from Sam Henrie. His wrist shot over the shoulder of Shrewsbury goalie Patrick Shaughnessy came just 34 seconds after Matt Ward put Shrewsbury up 3-0.

“They move the puck in practice all year long,” Turnblom said. “They are not allowed to be a one-man band.”

It was all Shrewsbury at that point. 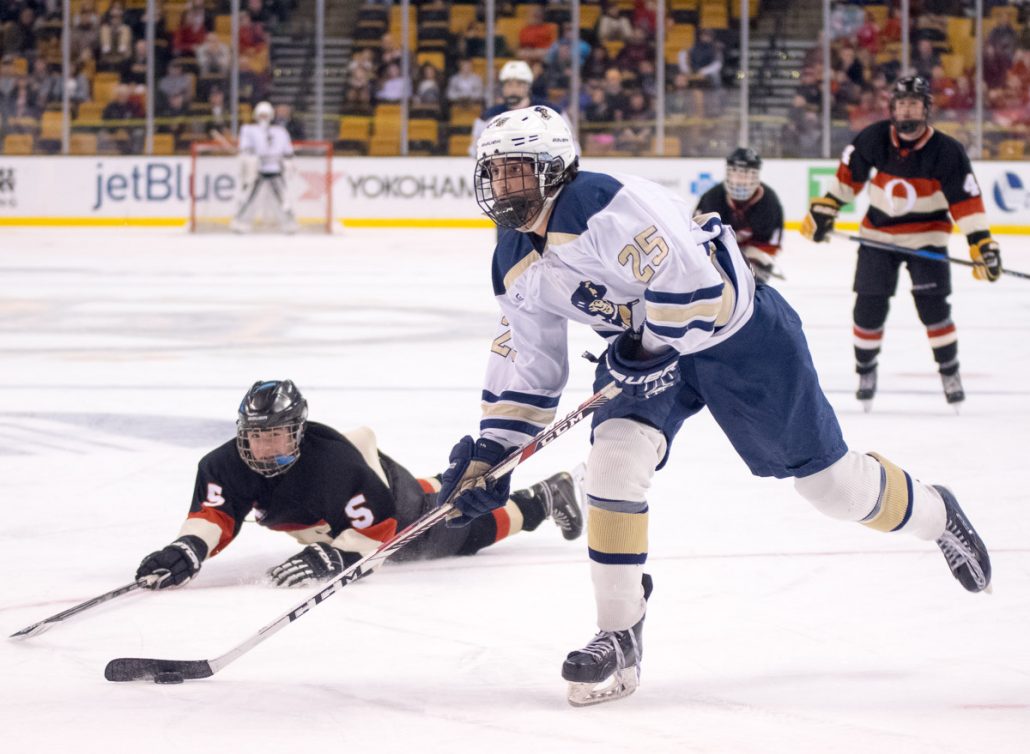 SHRESBURY’S Liam Quinlivan gets ready to fire shot on goal while ORR’s Sam Parks tries to block it in the Colonials’ 3-1 win over Old Rochester/Fairhaven in MIAA D3 state final. (Jamie Callery photo)

The Colonials held a major advantage in shots (20-6), territory and had about a handful of man-advantage rushes in the middle period.

They owned the puck, setting up shop on offense at will as if they were on a period-long power play (they never had a man-advantage in the game).

Meanwhile, the South champs, the team that scored 169 goals coming into the game, spent most of the middle period chasing the puck from Shrewsbury stick to Shrewsbury stick.

Old Rochester/Fairhaven suffered injuries that put Evan Stanley (7-1-8) and Henrie (39-33-72) out of commission at times.

“Even if we were healthy I think they were a bit too much for us,” Coach Labonte said. “They have big, strong kids on defense, and their forwards forecheck hard and put a lot of pressure on our forwards.”

The Colonials could have doubled their lead in the middle period were it not for Lady Steel. Two shots on goalie Chase Cunningham hit the post: Conall Persichino and Anthony Quinlivan in the last four minutes of the period. 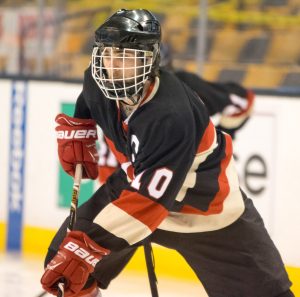 Sam Henrie had the lone goal for Old Rochester/Fairhaven in the Bulldogs 3-1 loss to Shrewsbury. (Jamie Callery photo)

Ironically, it was Quinlivan that set up Persichino’s ding off the goalpost on a perfect cross-ice feed.

But give Cunningham major credit — he turned away 18 shots and had to be on his toes the entire 15 minutes. He made 26 saves overall.

None of the Bulldogs’ six chances in the middle period on Shrewsbury goalie Shaughnessy were particularly golden, even the two shots coming on a power play early in the period.

Shrewsbury took a 1-0 lead 2:37 into the middle period when Liam Quinlivan grabbed a puck his twin brother Anthony sent around the boards on the right-hand side. He took it from center ice all the way in for a spin-around-and-backhander that made its way past the ORR goalie.

“We tried to play physical and wear them out,” Liam Quinlivan said. “We were really on our game in the second period.”

Shrewsbury struck again midway through the period. Jack Tepper took a shot amid a scramble out front, and Borys stuffed home the rebound at 7:47.

The teams remained scoreless after one. Shrewsbury held a slight territorial edge in the opening period and had better chances but only outshot Old Rochester/Fairhaven, 5-4.

The Colonials’ best chance came with 5:50 to play. Liam Quinlivan, from the ORR left corner, tossed the puck out front to Ward, who was two feet in front of Old Rochester/Fairhaven goalie Cunningham. His quick poke attempt was turned away, however.

The teams met all the way back in December in the Old Rochester/Fairhaven Bulldog Cross State Challenge in Marion. Shrewsbury won, 4-2.

Central Mass. champ Shrewsbury came into the game at 22-0-1. Its 19-0-1 regular season was the best record in school history.

South sectional champ Old Rochester/Fairhaven (24-3-0 coming in) had a much longer road. It got through the ever-tough South bracket, beating Foxboro (9-0), Hopkinton (4-3, two overtimes), Dartmouth (6-3) and Rockland (3-1).

It topped Lowell, 5-1, in the Eastern Mass. championship.