After falling to Wachusett in the Division 3 state semifinals a year ago in a heartbreaking shootout loss, Longmeadow took full advantage of their shot at redemption in this year’s state semifinal against the Mountaineers back at Holy Cross.  Liam Byrne delivered the game-winner with 6:05 left in the third period as the Lancers edged the Mountaineers, 3-2, to advance to the Division 3 state final next Sunday at the T.D. Garden.

“Wachusett is a great team,” Longmeadow coach Jim Joyce said.  “We knew if we were going to stay in it, it would have to be a low scoring game and we were hoping to keep it like this and we did.”

“I can’t describe how good this feels,” Byrne said.

Longmeadow will be seeking its third state title in program history.

“We’ve got a good program, we’ve always had a solid program but the kids really came together and beat a great team tonight,” Joyce said.  “It’s great.  In 2006 and 2010 we were there and we were lucky enough to win both those.” 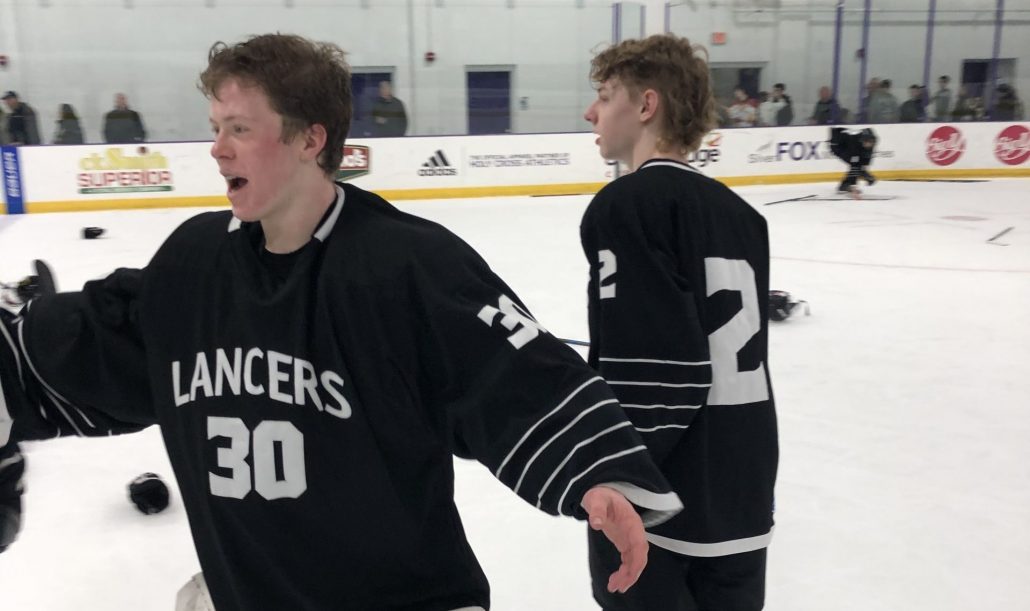 Longmeadow goalie Connor Rintoul (30) is all smiles after Lancers beat Wachusett 3-2 in MIAA D3 state semifinal to earn a trip to TD Garden next Sunday.

Longmeadow broke through at the 3:59 mark of the first period down a man.  Sean Baker stole a puck along the wall before centering it to Simon Higgins, who quickly wristed it home to make it 1-0 Lancers.

Late in the period up a man this time, Longmeadow doubled their leadyrn when Luke McHugh banged home a rebound to make it 2-0.

The two teams played a scoreless second period although Wachusett had two golden opportunities to break through.  After the Mountaineers couldn’t convert on a two-on-one, Michael Iacaboni’s shot from from just above the right circle clanged off the left post, as Longmeadow maintained their two-goal advantage.

Early in the third period, Wachusett finally broke through when Kevin Skagerlind’s wrister from the left dot broke through Lancer goaltender Connor Rintoul and into the back of the net to make it 2-1.

Joyce said he knew Wachusett would come alive in the third.

“We played a really solid first and second period but a two-goal lead is really difficult lead to maintain and you play more defensive and play in your zone more often and that’s what happened in the third period,” Joyce said.

With Wachusett pressuring for the equalizer, Byrne scored the eventual winner on a great individual play.

“I just took the puck up center ice, I saw a little bit of ice and I took it to my backhand and just drove the net like I’ve been taught to all year,” Byrne said.   “It ended up on my stick in front of the net and snuck through his five-hole.  I saw it in the back of the net.”

With 2:11 left, Sean Gardner’s wrister from the left point got home to make it a 3-2 game.  Wachusett kept pressing after that, but Rintoul kept everything out, as he recorded 21 saves in all.

“Our goalie came up big, he made some big saves down the stretch,” Joyce said.

Joyce also said his team did what they needed to do to slow down a very talented Wachusett team.

“We had a system for these guys to slow (Wachusett) down and it worked, for at least two periods,” Joyce said.

Joyce also said he was excited his group would get a chance to win a state title.

“To go to the Garden means so much for the kids and this is going to be a wonderful experience but we’re going to get them settled down, because we’d love another state title,” Joyce said.

As for Wachusett, the defending champs finished 20-2-1.  Longmeadow was the only D3 team to beat them all season long.  Mountaineer coach Matt Lane said he was proud of his team, and in particular, the seniors who played such a big role the state championship a year ago.

“I wouldn’t expect anything less from this group of guys,” Lane said.  “Great group, great senior leadership.  We challenged them between the second and third and they showed up in a big way.  Unfortunately, you fall one goal short sometimes and you wish you could get a period back.”