In the Central Mass. Division 3 final, top-seeded Wachusett Regional successfully defended its sectional crown thanks to a 3-0 win over No. 2 Nashoba Regional.  Joey Naze knocked home a rebound on the power play in the second period to put the Mountaineers up 1-0.  On another power play, Peyton Marshall tipped home a Ryan Murray shot that doubled the lead in the third period power to make it 2-0.  Kevin Skagerlind’s empty-netter capped the 3-0 win.

Donovan Alfama recorded the shutout, making 17 saves.  The Mountaineers, who won the D3 state title a year ago, advance to the state-semifinals where they will play the West Springfield/Longmeadow winner on Saturday at Holy Cross at a time to be determined.   West Springfield and Longmeadow play in the Western Mass. Division 3 title game on Thursday at 8:30 p.m. at Olympia. 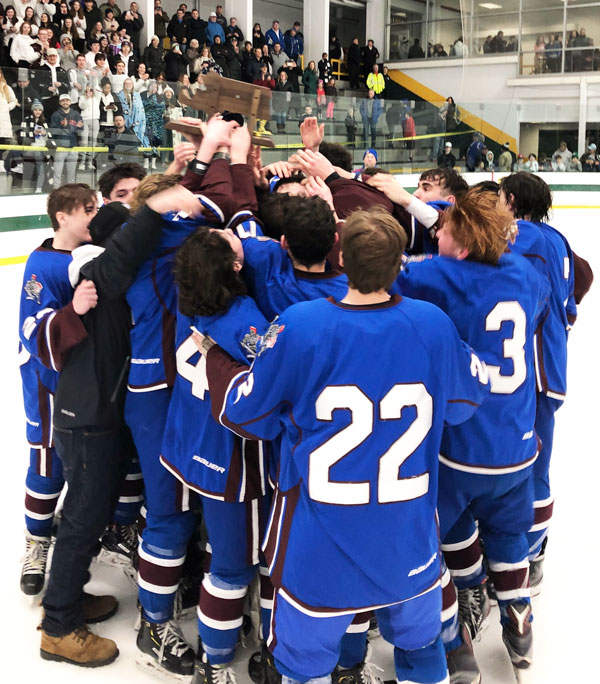 In the Central Mass. Division 3A final, fifth-seeded Lunenburg/Ayer-Shirley edged second-seeded Hopedale/Millis, 4-2.  It was the second sectional title for the Blue Knights in three years.

Matt Albert scored once in the first period and again in the second period as the Blue Knights took a 2-0 lead into the second intermission.  In the third period, Hunter Dunn cut the Lunenburg lead to 2-1 after he stole a puck and scored shorthanded.  Later in the period, Nathan Handy scored on a nice rush, showing good patience as he worked his way across the crease before burying to make it 3-1 Blue Knights.

Just 10 seconds later, Hopedale made it a one-goal game again when P.J. Gray stuffed home his rebound chance to make it 3-2.  Lunenburg put it away late however on Noah Razzetti’s empty-net goal, making it a 4-2 final.  The win capped an incredible run for the Blue Knights, who started the season 3-7 and qualified for the postseason on the last day of the regular season.  Lunenburg now moves on to the Division 3A title game Saturday at Holy Cross where they will play the Western Mass. champ.  Greenfield and Wahconah will play for that Western Mass. title at 5:30 p.m. at Olympia on Thursday.