The MIAA Central Mass. Division 3 tournament will include six teams this year, the same number of teams the tournament has featured in each of the past two seasons. 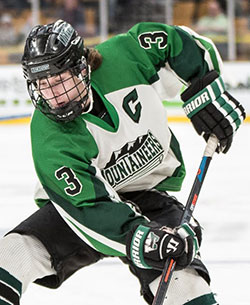 The group is highlighted by Wachusett Regional, who didn’t lose to a Division 3 opponent all season long with the Mountaineers’ only loss coming in a 3-2 setback against Division 1 Shrewsbury.  The Mountaineers are the reigning Division 3 state champions, and their 17-1-2 record has earned them the top overall seed in this year’s tournament, along with an opening round bye.

The Mountaineers will face the winner of Wednesday’s Marlboro/Algonquin matchup in the semifinal round next weekend at the Wallace Civic Center.  Wachusett is led by captain Kevin Skagerlind.  His 46 points were the fourth most in Central Mass. in the regular season.  Skagerlind, along with cousins Grant Gardula and Ryan Gardula, make a formidable top line for the Mountaineers.  Defenseman Sean Gardner (7-13-20) had a standout season as well.

Nashoba Regional/Clinton earned the other opening round bye, overcoming a 0-2-1 start to finish 10-4-6 to secure the two-seed.  The Chieftains ended the regular season on a ten-game unbeaten streak, going 6-0-4 over that span.  Nashoba’s last loss came on January 15th.  The Chieftains will play either Hudson or Leominster in next weekend’s semifinal round at the Wallace Civic Center.  Nashoba was 0-3-4 in the regular season against teams that qualified for the Central Mass. Division 3 tournament.  The Chieftains are led by Dan Lemanski (17-10-27), Ryan Maki (7-14-21), and Robbie Carter (6-12-18).

The first quarterfinal matchup features No. 4 Marlboro, as they will host a hot No. 5 Algonquin Regional team on Wednesday at 6:30 p.m. at Navin Arena with the winner moving on to face Wachusett in the semifinals.  The Tomahawks (10-8-2) were all but forgotten from the tournament discussion through January, but a six-game winning streak in February propelled the Tomahawks into the postseason.

Algonquin beat Western Mass. power Longmeadow and West Springfield during the streak, as well as Hudson and Shrewsbury which makes the Tomahawks a dangerous team to play right now.  The Tomahawks have used balanced scoring, strong goaltending from both Jack Blair and Zachary Robbins, and solid defensive play, anchored by Nick Larsen to push their way into the postseason.

Marlboro (10-6-4) enters the postseason having beaten the Tomahawks in two of their three regular season contests.  Kyle Caissie’s return from junior hockey has been a spark for the Panthers, as the senior has had a strong season with 10 goals and 15 assists.  Marcus Chrisafideis (9-11-20), Kyle Carroll (6-9-15) and Matt Farrell (8-7-15) contributed throughout the season, while Billy McCarthy (1.66 GAA) was stellar in net.

No. 3 Hudson hosts No. 6 Leominster in Wednesday’s other quarterfinal matchup.  That game will be played at the New England Sports Center, starting at 7:20 p.m.  The Hawks (11-6-3) won the Quinn Conference for the second year in a row, posting a 6-2 record in conference play.  Hudson is led by Matt Lombardi (15-11-26), Colin Dannenfels (5-15-20) and Cam Bower (9-10-19).  Mike O’Malley had a strong year as well, posting 14 goals while Bailey Watts was strong defensively from the blue line.  Hudson beat Leominster, 6-1, in their only regular season matchup back on January 20th.

The Blue Devils (9-10-1) snuck into the tournament as the sixth and final team by virtue of finishing second in the Roy Conference standings.  The Blue Devils sputtered down the stretch, going 0-3-1 over their last four games, but a 4-4 tie against Nashoba in their regular season finale was enough to extend the season for the Blue Devils.  Jeremy Maillet (15-12-27), Therron Glynn (10-9-19), and Maliq Munoz-Preko (8-10-18) pace the Blue Devil attack.