Back in early January, Natick faced Bay State Conference foe Milton and the teams ended up tying at two goals apiece. So, when the 15th-seeded Wildcats met the second-seeded Redhawks in a Division 1 South first round matchup at the John A. Ryan Arena on Wednesday night, seedings meant nothing.

Milton jumped out to a 2-0 lead in the second, only to have Natick tie it up heading to the third. With just over five minutes remaining Sean McWhinnie scored on the power play to put the Redhawks ahead. An empty net goal from Alex Crook with a second left sealed a hard-fought 4-2 win for Natick.

Now, the Redhawks (14-2-5) will face either seventh-seeded King Philip or 10th-seeded Franklin in the D1 South quarterfinals on Saturday (7:10pm Loring Arena). Milton ends its season at 7-11-4.

“Just stick with our game,” Natick head coach Bill laCouture Jr. said when asked what the message was when his team fell behind 2-0. “Stick with our game, play our hockey. We kept focused and we just battled back. We have multiple speeds we can go at, so we just started changing up the lines and we got guys going and got guys stepping up.”

Natick had been off for a week since its last game, and it showed in a lethargic first period for both teams. It was 0-0 after one despite Natick outshooting the Wildcats 11-3 in the frame. 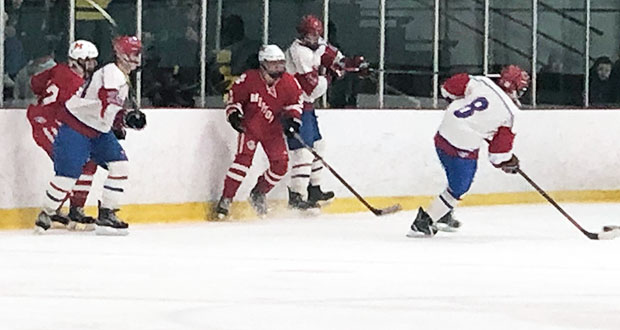 Natick’s Matt Haskell (8) moves away from a pack and head towards the net in the Redhawks 4-2 first round win over Milton in MIAA Division 1 South play.

The second period was a wild one as Milton jumped ahead 1-0 on a PPG from Jimmy Fallon just 31 seconds in. Moments later with Natick back in the box for a cross check Sean McDougall scored his own power play goal to make it 2-0.

“We knew it would be a battle,” said Milton coach Chris Watson. “It’s aways a battle in the Bay State, I don’t care what the seeds are, anytime you’ve got a Bay State Conference team playing against another one it’s going to be a knock-down, drag out battle. Unfortunately it always seems to be a first round matchup but it is what it is.”

After wasting 1:03 of a 5-on-3 advantage midway through the period, Natick finally got on the board with 7:27 left when Nick Polymeros tipped in a shot from Colton Green. The Redhawks tied it at 2-2 with 2:21 to go when Andrew Christlieb collected a loose puck in the shot and fired a shot that deflected off a defenseman and in, sending the teams to the dressing room all locked up.

With seven minutes to play it appeared as if Milton was going to take the lead as a shot through traffic snuck past Natick goalie Luc Gagnon (15 saves) and slowly crept towards the goal line. Somehow, the puck stopped directly on the line and Adam Loftus had the wherewithal to sweep it off the line before it trickled in.

Moments later after a cross check by Milton, McWhinnie beat Milton netminder Ryan Dexter (30 saves) on the power play to make it 3-2 Natick with 5:10 to go. With just a second remaining Crook finished off his empty netter to seal the deal.

“It’s a different season now, so every team is coming at it a different way,” McWhinnie said when asked if he knew this would be a tighter game than the seeding indicated. “We knew it was going to be a hard game, just happy to be moving on.”