* Defending North sectional champion Stoneham, seeded 12th, downed #5 Winthrop, 6-2 to move to the quarterfinal round. Seniors Nick Feliciano and Nikko Jokiaho each scored a pair of goals for the Spartans, while James Gorman and Cody Goulding each added a goal. Winthrop finishes up the season at 14-5-2.

* Boston Latin will be Stoneham’s next opponent. The Wolfpack defeated Somerville, 4-1, with goals from Sam Hutchinson, Damon Alexander, Frankie Linso and Jeff Monahan.  Austin Pacheco had the lone goal for the Highlanders, who end up at 9-7-5.

* In maybe the most exciting game of the night, Jack Thibodeau‘s third goal of the night, coming in double overtime, gave #14 Danvers a wild 6-5 win over #3 Gloucester. Jared Msicsz‘s goal with three seconds left in regulation sent the game into extra time. Calvin Mansfield and Cody Plaza also scored for the Falcons. Freshman Jack Costanzo had a hat trick and E.J. Field two goals for the Fishermen, who finish at 15-3-3.

* #6 Marblehead advanced to the quarterfinals, getting a pair of goals from Jacob Garfield in a 5-2 win over Pentucket. Colin Hart, Will Schull and Charlie McGurrin added a goal each for the Headers. Jack Queenan and Cam Martin scored for the Sachems, who close out at 11-9-1.

* Brad Killion had a hat trick and Mike Beevers and Ryan Lindholm added goals as #8 Triton eliminated #9 North Andover, which finished at 12-7-2. Triton awaits the winner of tonight’s Masconomet-Wilmington first round matchup.

* Defenseman Michael Arsenault‘s overtime goal gave #7 Tewksbury a 2-1 win over Lynnfield. William O’Keefe also had a goal for the Redmen, who will take on Lincoln-Sudbury on Friday in a quarterfinal. 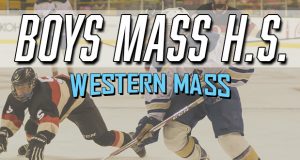