MIAA Boys Division 1A: A Look At Monday’s Play-In Games

Duxbury defeated play-in opponent Xaverian, 2-0, on Jan. 26. Marshfield and St. Mary’s did not meet during the regular season.

Play-in winners advance to the double elimination1A Tournament, which gets under way on Sunday, March 3 at Tsongas Arena in Lowell. Monday’s play-in losers return to their respective Sectional tournaments as top seeds. Here’s a look at the four play-in selections, seeded by winning percentage by the Tournament Selection Committee:

The No. 7 Green Dragons boast a luxury most teams don’t have – two standout tournament tested goaltenders in senior captain Nate Romanelli and junior Steve Pisani. They have split time all season with neither playing more than two games in a row. Duxbury led the division in wins (18), ranked sixth in goals allowed (28) and owned a plus-42 differential. 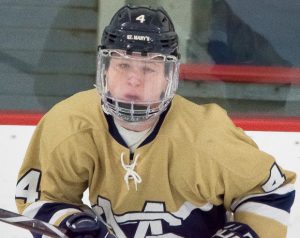 The Spartans are in the play-in field for the second consecutive year. This time the Catholic Central Large’s second-place club is looking to take the next step. Coach Mark Lee’s team closed the regular season with an impressive 2-2 tie against 1A second seed Pope Francis and ranked among the division’s highest-scoring teams with 77 goals (plus-44 differential). 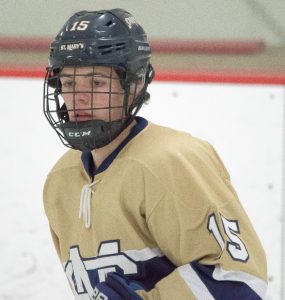 The Hawks claimed second place in the Catholic Conference and are chasing their first-ever state title in hockey. They will lean heavily on senior goalie James Herring, who logged the bulk of the time and compiled a 2.20 gaa/.912 save pct./2 SO slash line. Senior AJ Scott is a proven back-up. Seniors Matt Joyce (10 points) and Doug Concannon and sophomores Shane Spinale, Andrew Barton and Trevor Connolly form the core on defense.