It’s not often teams from the same community square off in postseason play but it happened Saturday as Reading defeated Austin Prep and St. Johns (S) bounced Shrewsbury to claim bragging rights for the next year.

In Woburn, the Marauders’ junior standout Ben Fici buried a 2-on-1 with the teams skating 4v4 at 1:52 of the first overtime. The goal was Fici’s third of the postseason and 15th for the year. Senior captain Justin Rocha set the play in motion, winning the puck along the left boards and leading the break.

Senior goalies Nico Carere of Belmont, who posted his seventh shutout of the season with an eye-popping 46-save performance, and Sal Caruso of St. Mary’s excelled. 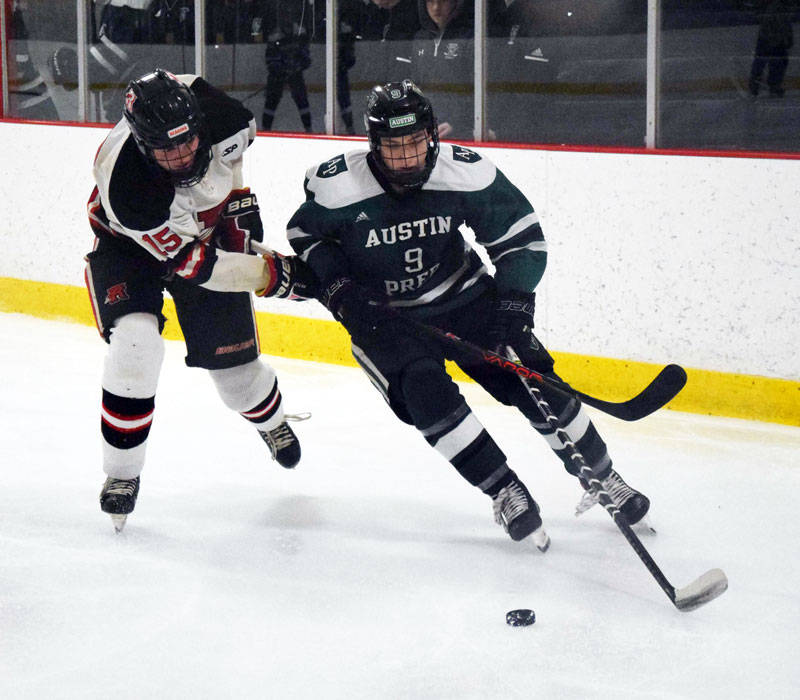 In Woburn, the Rockets claimed the “Battle of Reading” with a strong all-around performance. Sophomore Michael Dufton broke a scoreless tie with a wraparound goal at 9:55 of the second period and sophomore Ryan Goodwin made it 2-0 with a 2-on-1 finish late in the period. The Cougars’ Chris Roy scored what seemed it could be a momentum-building goal with 8.5 seconds left in the period but Reading regained its two-goal lead on junior Treavor Owens’ tally in the third and junior Landyn Greatorex ended it with an empty-netter. The teams played to a 2-2 tie at The Ferreira Classic two weeks ago.

Reading, now 12-6-6, returned to the Sectional as the top seed after losing a Division 1A play-in game and now faces Middlesex Liberty Division rival Belmont in Thursday’s semifinal with a trip to the Sectional title game at Tsongas March 9 on the line. Catholic Central Large champion Austin Prep wound up at 11-8-4.

In Billerica, Shrewsbury scored first but in-town rival St. John’s (S) had the answer, scoring three unanswered goals to win the “Shrewsbury Scuffle.” The teams played to a 1-1 tie in January. After freshman Eli Cardosi gave the Colonials a 1-0 lead at 10:12 of the first period, the Pioneers countered with goals from  Ryan Richard, senior Hunter DiGregorio (GWG) and junior Max Shustak (ENG) to continue pursuit of their first State title since 2004.

In Billerica, the Grey Ghosts prevailed with the teams skating 3v3 when junior Sean Milanette buried the game-winner. Waltham’s junior forward Anthony Attardo forced overtime when he tied it with a little more than a minute to play and the goalie pulled. Westford took a 1-0 lead in the game’s opening minute on senior Jason Bunyon’s goal, assisted by Milanette and senior C.J. Pacifico.

They doubled the margin to 2-0 in the period’s closing minutes on Evan Twombly’s jam job from the crease. The Hawks closed to 2-1 on a power play goal by junior Dylan Fogg, set up by senior Justin Moran.