Both teams have been involved in tight, low-scoring games in the post-season to date. 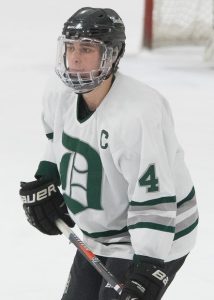 The Dragons (21-5-0) shutout Wellesley 2-0 in a quarterfinal matchup, needed double overtime to oust Barnstable in the semifinals 3-2 and blanked a tough Franklin team 3-0 in the North final.

The Sachems found themselves trailing 2-0 in each of their first two tournament games. They went to a shootout and won 3-2 against Bishop Fenwick in a North quarterfinal, and rallied for a 4-2 semifinal win over Billerica. In the North final, Winchester scored three third period goals to break away from St. John’s Prep.

The teams did not play during the season, nor did they have any common opponents. So, it should be an interesting battle.

Both teams are solid in the defensive game and have excellent goaltending. While the Sachems offensive comes primarily from one line, the Dragons have been getting offensive contributions from several different players.  Duxbury has 80 goals in 26 games. Winchester has 78 in 24 games.

“Duxbury plays excellent team defense and it can be extremely difficult to penetrate and gain zone time,” said Winchester coach Bill Burns. “We will need to get pucks to the net and be aggressive on our fore check along with a good transition game.”

Winchester (17-7-0), which finished tied for second in the Middlesex League Liberty Division behind Super 8 participant Arlington,  will again rely on its big top line of seniors Michael Drew (2 goals vs St. John’s Prep) and Joe Lepore and junior Ryan McCarthy, responsible for about 70 % of the team’s goal scoring. Senior Nolan Butler and junior Colin Van Stry have added supplemental scoring. 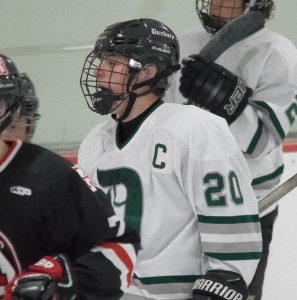 A stout Winchester defense that also gets involved offensively is led by seniors Luke Mix and Jack Houle, and junior Michael Martignetti.

Duxbury won the Patriot League and got a Super 8 play-in game. The Dragons fell to Xaverian and returned to the South sectional as the #1 seed.

Coach John Blake’s team has been getting offense from a variety of sources like senior James Lawlor and juniors Tanner Smith, Zach Stewart, Ben Cheney and Friend Weiler.

Senior Jack Venturelli anchors the Dragons defense. He had the double OT game-winner in the win over Barnstable.

Goaltending is a strength for both teams. Duxbury has a pair of experienced netminders in senior Nate Romanelli and junior Steve Pisani. Pisani has played the last two games for the Dragons. Meanwhile, sophomore Rob DiVincenzo will be in goal for the Sachems. The two-year starter was a big reason why the Sachems got past St. John’s Prep in the North final.

“We have been resilient all season in the aspect of coming from behind when needed,” Burns said. “Although, getting behind Duxbury is not a good situation for us on Sunday.”