The 2019 MIAA Boys Division 2 North sectional will feature 17 teams. One preliminary game – between 16th seeded Wilmington and 17th seeded Wakefield – will kickstart the tournament on Monday.

Here is a look at the field:

#1 Masconomet (18-2-0): The Chieftains regular season was highlighted by a 17-game winning streak after losing on opening night. The Cape Ann League champions are solid in all zones and will be tough to beat.

“I’m really proud of our players and the season we have had so far but it doesn’t matter now as we enter the tournament,” coach Andrew Jackson said. “We will have to be super focused, work harder and smarter than our opponent each night and make sure we give it all we have – the field is so strong this year!”

“We will have to play our best hockey of the year to advance in the tournament,” Carlin said. “We have great respect for all of our potential opponents.”

Juniors Johnny Oblak and Angelo Venuto have been offensive catalysts all season for the Warriors, as has junior Jacob Leverone.

Junior Tim Duffy and sophomore Brian Barringer will be defensive keys. In goal, veteran senior Cam Marcoux should get the call. 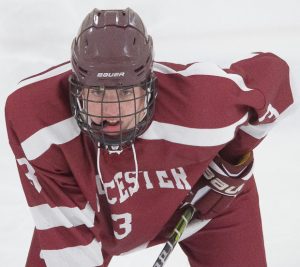 #3 Gloucester (15-2-3): The Fishermen put up some gaudy offensive numbers in winning the NEC South. The team is averaging just under six goals a game.

#4 Boston Latin (14-3-3): The Wolfpack, co-champions with Lincoln-Sudbury in the MVC/Dual County II, are perhaps the hottest team entering the tournament, going 8-0-1 down the stretch.

“We try and prepare all year to be playing our best hockey as the season winds down, so hopefully we can play a great game in the first round, survive, and move on from there,” said coach Frank Woods. “My experience with the D2 North is that historically, it has been the most competitive bracket in the state.”

On the blue line, senior Frank Linso (9-16-25) was the MVC/Dual County II MVP. Sophomore Robert Melvin (12 pts) and  freshman Damon Alexander (12 pts) will be a key factor as well. Freshman Luke Young should be up to the task in goal for BL.

#5 Winthrop (14-4-2): The NEC North champions match up well with anyone they might face in this bracket.

#6 Marblehead (14-4-3): The Headers shot out of the gate fast and continued playing well all season, making Chris Wells’ first-year behind the bench a successful one.

“The biggest key for us is how we play in our own end,” Wells said. “Peter (Santeusanio) has been great for us (in goal) but breakdowns in D-zone coverage have cost us games this season. Good defensive zone play will be key, especially in tight-scoring playoff games.”

Senior Jacob Garfield (19-19-38) has been the trigger-man up front for the Headers along with sophomore Will Shull (18-15-33). Freshman Charlie McGurrin (13 goals) has had a big season. Juniors Colin Hart (18 pts) and Zach Piersol (14 pts) must be watched as well.

On defense, seniors Paul Heffernan, Brendan Locke, Ben Gansenberg and Thomas Woodfin form a solid nucleus. Peter Santeusanio (2.04 gaa) will be the man between the pipes.

#7 Tewksbury (13-4-3): The Redmen are another team capable of going far, thanks to their balanced attack.

Senior captain Michael Arsenault (15 pts) is a rock on the Tewksbury blue line. Junior Patrick Letourneau should get the call in goal.

“We’d like to think that the strong finish will be a help,” said Triton coach Ryan Sheehan. “We want to get better every practice, every game. Hopefully we can peak at the right time. It is a highly competitive field and I think that any team can beat any other team on any given night.”

Junior Tyler Godfrey (16 pts) and sophomore Brady Lindholm (12 pts) are a pair of defensemen who like to get involved offensively, Junior Connor Kohan is another fixture on the blue line. Senior Ben Fougere (1.76 gaa) was the workhorse in goal during the season.

#9 North Andover (12-6-2): After a mid-season lull, the Scarlet Knights, like Triton, finished on a high note, winning their last four games, all via the shutout route.

“In order to be successful North Andover needs to continue to play tight defense,” said coach Peter Marfione. “Our defense has been great all season (just 27 goals against). Up front we need to look at our depth and hope our forwards stay hot.”

Senior Jaret Simpson will be a key on defense for coach Jon Gardner, while veteran senior Aidan Kelley should get the nod in goal.

#11 Stoneham (11-8-1): The defending North sectional champions needed to turn it on a bit at the end to ensure being back in the post-season field.

Senior Nick Feliciano had a big offensive season for the Spartans, including a five-goal outburst in the regular season finale. Seniors Cody Goulding and Nikko Jokiaho, and sophomore Brandon Stewart add to the mix.

Junior Will O’Brien anchors the defense for coach Paul Sacco.

#12 Pentucket (11-8-1): It is three seasons in a row now that the Sachems have qualified for the post-season.

A pair of sophomores – Cam Martin (34 pts) and Richie Hardy (34 pts) – are the offensive leaders for coach Mark Morreale. Senior Jack Queenan (20 pts) chips in his share as well.

#13 Somerville (9-6-5): Going 5-1-1 over their final seven games, including a Mulloy Tournament title and tie with third-seeded Gloucester, brought the Highlanders to the promised land.

On defense, seniors Nolan Roche and Dylan Zraket will be counted on heavily.

#14 Danvers (10-8-2): The Falcons are not your typical #15 seed. With their defensive, close-to-the-vest style of play, they can compete with anyone, as it showed in a 2-0 win over top-seeded Masconomet a week ago.

Sophomores Brian Taylor and Michael Papamechail and freshman Cody Plaza are part of a young blue line corps. Sophomore Adam Bridgeo had a strong year (1.76 gaa) in the cage.

#15 Lowell Catholic (9-7-4): The Crusaders have no fear heading into the post-season, knowing full well their schedule has prepared them.

“We’re confident that we can make a run in the tourney, said first-year coach Aaron Crear. “We played a tough schedule of 11 division one teams and a total of nine games against post-season bound opponents. This has given us a good foundation of high level competition as preparation for the post season.”

The defensive unit has battled injuries but should be back intact for the tournament. Seniors Nathan Silvia and Shane McCarthy could be keys. Senior Colin Gleason has had a solid year in goal for the Crusaders.

#16 Wilmington (8-11-1): The Wildcats qualified under the Sullivan Rule and get a preliminary game on Monday.

Senior Ryan Barrett has been instrumental to the offense for coach Steve Scanlon, as has junior Joe Hill. Conlin Duffy has been solid on the blue line.

#17 Wakefield (6-11-3): The same goes for the fellow Middlesex League Freedom Division foe Warriors. The two teams square off to open the tournament on Monday.