* Waltham got past Central Catholic in the MVC/Dual County Small by a 3-1 score. Janice O’Neil led the attack with a pair of goals, while Jessica McPherson had the other. The Hawks improve to 8-4-1.

* Cassidy Gruning had the game-winning goal, her second of the game,  as D1 #5 Methuen-Tewksbury rallied to beat D1 #9 Shrewsbury 4-3. Julia Masotta and Carolyn Curley each had a goal as well for the Red Rangers. Dolly Herlihy had a goal and two assists for Shrewsbury.

* D1 #4 St. Mary’s got two goals from Marina DiBiasio in a 6-0 win over Winthrop. Kate Gray, Samantha Porazinski, Jenna Chaplain and Codi Butt each netted a goal for the Spartans, who officially qualified for post-season play with the win.

* Two goals from Gabby Davern and one from Emma Perry allowed Bishop Fenwick to tie up Ursuline Academy, 3-3. 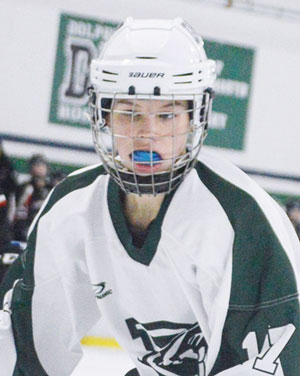 *  Kayla McGaffigan scored five goals to power D2 #5 Dennis Yarmouth to a 6-1 win over Falmouth. Ava McGaffigan had the other goal for the Dolphins, now 11-2-0 overall.

* Ellen Linso registered her sixth shutout of the season in Boston Latin’s 1-0 win over Concord Carlisle. Emma Tobin had the lone goal for the Wolfpack, officially qualified for the MIAA tournament.

* Casey Ward notched a pair of goals, and Emily Hohmann and Emma Breen each had one to power Norwell to a 4-1 win over BMW/ORR.

* Emily Hamann and Gina Richard each scored three goals to lead St. Peter-Marian to a 6-2 victory over Auburn. Goalie Mia Dang had 17 saves between the pipes.

* Bishop Stang slipped past Cohasset/Hanover, 2-1, with goals from Destiny Arruda and Madison Andre.

* A goal from Katie Crews late in the third period enabled Medway-Ashland to earn a 1-1 tie with Mansfield/Oliver Ames/Foxboro. Rachel Gittings made 24 saves for M/A.