* Katelyn Brown had a hat trick to power Franklin to an 8-3 win over Stoughton. Cassi Ronan, Gina Vignone, Lyndsey Maloof, Emily Landry and Tina Pisano each had a goal for the Panthers.

* Two goals each by Grace Felicio and Kaci Ryder powered Shrewsbury to a 6-0 win over HPNA.

* Falmouth knocked off Dennis-Yarmouth 4-2 led by two goals from Sam McKenzie. Jaqueline Tallino and Hannah Tobey scored as well for the Clippers.

* Matignon blanked Leominster 4-0 as Carolyn Mahoney and Lexie Turner each had a goal and two assists. Erin Bennett and Molly McConnell also scored for the Warriors. Mahoney reached 100 career points in her Matignon career. Dana Smullen recorded her fifth shutout of the season.

* Erin Irons and Abby Gendron lit the lamp as Masconomet slipped past Winthrop, 2-1.

* Julia Masotta had two goals and Carolyn Curley and Lydia Pendelton one each in Methuen/Tewksbury’s 4-1 win over Acton-Boxboro.

* Medway/Ashland defeated Medfield, 3-1, for its first win of the season. Brynn Moriarity led the offensive attack with two goals. Katie Crews had the other goal, and freshman Maggie Lester assisted on all three tallies.

* Erin Kelly had three goals and Ellen Linso grabbed the shutout between the pipes in Boston Latin’s 4-0 win over Concord-Carlisle.

* Goals by Ariane O’Rourke and Katie Cronin enabled Winchester to tie up Reading, 2-2.

* In Barnstable’s 4-0 win over the Cape Cod Furies, Sarah Schoote, Kate Brewster, Gabby Labarge and Cayleigh Malone each had a goal. 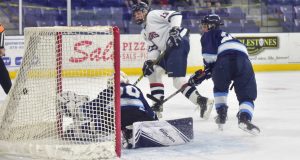 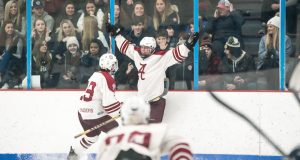