It truly was a banner season for Wellesley last winter. The Raiders roared to the D2 state title with a 19-2-3 record, outscoring four opponents in the post-season to the tune of 15-3. Their only two regular season losses came at the hands of D1 Austin Prep, the #1 ranked team for most of the season.

Can Wellesley go back-to-back and win another championship? That remains to be seen, but the Raiders should be considered as good a choice as any. 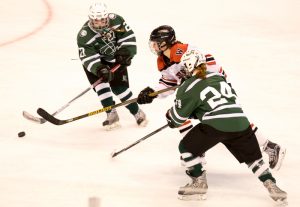 Canton’s Rose Malloy (23) and Leah McLellan (24) try to knock a
Wellesley player off the puck in the 2018 Mass D2 title game at TD Garden.

Wellesley will begin the 2018-19 campaign as the #1 team in the HNIB News Massachusetts Girls D2 Preseason Top 10. Someone has to knock them off.

One team that could do it is #2 Archbishop Williams (16-5-2). The Bishops have been getting better and better the last few years and have the pieces to challenge for D2 supremacy. Be sure that coach Mark McHale will have his club ready.

#3 Westwood (13-7-3) has been one of the premier programs in Division 2 the last several years and things should be no different this winter for the Wolverines.

#4 Canton (18-4-3) has reached the state final two years in a row now, falling to Notre Dame in 2017 and being edged by Wellesley 1-0 last winter. If the Bulldogs can replace All Scholastic goalie Colleen Kelleher, they will be in the hunt once again with their stingy, defensive style of play.

#5 Notre Dame of Hingham (14-7-2) has its third coach in three years, as longtime assistant at Hingham HS John Findley takes over on the bench. The Independent Cougars will be in the hunt.

Keep an eye on #6 Natick (14-6-2). The Redhawks bring back key players at each position and can not be overlooked.

Some teams ready to make a big jump this year are Medfield/Norton at #7, and Norwell at #8. #9 Algonquin/Hudson reached the D2 semifinals last winter.