After winning the 2016 state championship, Austin Prep has come up short the last two seasons, falling in the quarterfinals to Masconomet in 2017 and in the semifinals to Woburn in 2018. Could 2019 be the Cougars year?

It very well could be. 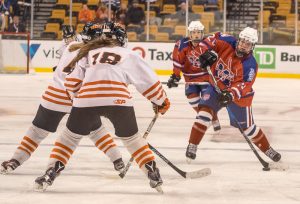 Austin did graduate Catholic Central MVP Kendra Currier, but the majority of last year’s club that was undefeated up until that loss to Woburn returns. And, the Cougars have a couple of new talented players in the lineup that will bring immediate dividends. They got the nod as the #1 team in the HNIB News 2018-19 Preseason Top 10.

#2 Methuen/Tewksbury (22-2-2) joined the Division 1 ranks last season and promptly reached the state final game, where they, too, fell to Woburn. Like Austin Prep, the Red Rangers graduated a premier player in Kelly Golini, but the bulk of their key players from a year ago are back. And, like Austin Prep, M/T has a newcomer in senior forward Julia Masotta that will contribute right away.

#3 Shrewsbury (20-1-1) was the top seed heading into the post-season last winter, coming up short in a classic quarterfinal loss to Masconomet. The Colonials will be back, especially with 48-goal scorer, and Providence commit, Delaney Couture returning for her senior season.

#4 St. Mary’s Lynn (16-4-2) also seems to be in the mix, and this year is not an exception. The Spartans, led by senior Mady Hentosh, one of the state’s top blue liners, have their usual young, talented team that will be ready come tournament time.

Another team always around is #5 Duxbury (17-4-2), The Dragons have a boatload of returners back from last year’s Patriot League champions and cannot be underestimated.

Two-time defending state champion Woburn (24-0-2) lost almost all of its offense to graduation. But veteran coach Bob MacCurtain is a crafty master so don’t expect the Tanners to slide much. We have them at #8 in this preseason rankings.

A couple of teams to watch? How about #7 Arlington from the Middlesex League, #9 Andover from the MVC/Dual County Large, and #10 Braintree from the Bay State League.