Top-ranked in Massachusetts Division 1 girls hockey since the pre-season, Austin Prep hosted D2’s #1 team Notre Dame and like the Cougars, a defending state champion, on Saturday and came up on the short end of a 3-1 score.

The loss was just enough to knock the Cougars out of the top perch, at least for this week. But barely. 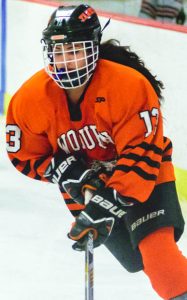 Woburn (13-0-1) slides into the #1 spot in this week’s HNIB News Mass. Girls D1 Top 10. The Tanners blanked Watertown (6-0) and Melrose (4-0) this week, making it four shutouts in the last five games for the Tanners, who have outscored opponents to the tune of  70-14. Junior forward Georgie Santullo is leading the prolific scoring attack with 42 points..

If you want to list #2 Austin Prep (9-1-1) as Team 1A in the poll, that works for us. Losing to another of the state’s premier clubs will not affect the Cougars took much. They did knock off Archbishop Williams (4-0) earlier in the week. Another tough week looms with a Wednesday battle against #6 St. Mary’s, and then a return engagement Saturday with Longmeadow.

Spots 3-6 stay the same this week, as all four teams kept on winning.

#3 Beverly/Danvers (12-0-1) blitzed Marblehead (8-1) in its only action of the week. Tuesday the Panthers travel to Winthrop to take on a tough Winthrop/Lynn club, and host Peabody/Lynnfield on Saturday. Senior Izzy Primack joined the 100-point club in the Marblehead win.

#5 Needham (13-0-1) continues to cruise along. adding wins over Norwood (4-2) and Framingham (10-1) to its resume. Looking ahead, Needham will tangle with Weymouth (Wednesday) and Braintree (Saturday). 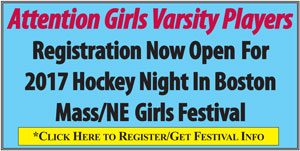 #6 St Mary’s Lynn (9-2-0) picked up wins over Framingham (7-1) and Archbishop Williams (4-1). The Spartans have a second tough game on Saturday on the road against Haverhill/Pentucket/North Andover. Eight different players have 10 or more points for St. Mary’s.

Westford Academy (8-2-1) jumps up a peg to #7. The Grey Ghosts defeated Algonquin (3-0) and Acton-Boxboro (3-1) this past week. Lincoln-Sudbury (Wednesday) and Billerica/Chelmsford (Saturday) provide this week’s opposition. Hannah Keefe leads the offense with 21 points.

The bottom three spots in the Top 10 have shifted a bit. Barnstable (7-4-2) jumps back in at #8 after a key 4-3 win over Hingham Saturday, after a win over Plymouth and a tie with Canton. The Red Raiders have Sandwich Wednesday, then a couple of toughies with Notre Dame (Thursday) and Duxbury (Saturday).

#9 Braintree (8-2-1) got tripped up by Natick (2-1) but bounced back with wins over Quincy/North Quincy (5-1) and Fontbonne (4-0). Prior to taking on Needham, the Wamps get Framingham Wednesday.

Boston Latin (11-1-2) rounds out the Top 10, dropping after suffering its first loss of the season Saturday to Cambridge (4-2). The Wolfpack looks to rebound this week against Waltham (Wednesday), Fontbonne (Thursday) and Central Catholic (Saturday). 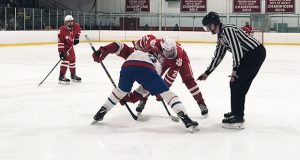