Top-ranked Notre Dame Academy (4-2-0) remains in its familiar role for this week, returning to action witha 3-0 shutout win over Ursuline Academy. A pair of tests loom this week for the Cougars with Westwood Wednesday and Boston Latin (Saturday). 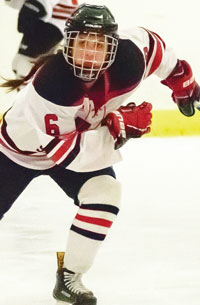 One of the bigger stories of the young season is #2 Winchester (5-0-0). The Sachems pulled off a big 3-1 win Saturday over Reading to remain unbeaten. They have scored 22 goals in those five games, coming as a bit of a surprise to coach Craig Seabury, especially since senior Mariah Redler, one of the team’s top scorers last year, is out for the season injured.

“It is definitely surprising,” Seabury said. “I thought we would struggle a bit to score goals, but we are scoring. We are getting timely scoring.”

Senior veterans Madison Micciche and Tara Doherty have continued their scoring prowess, but a couple of freshmen have come in and picked up the slack. Both Niki Micciche (4 goals) and Katie Cronin (3 goals) have contributed in a big way, which is key with Winchester in the midst of a tough stretch.

“This was a key win for us, helped with our confidence,” Seabury said. “With the stretch we have you don’t want to get into a three or four-game losing streak.”

This week, Winchester has Belmont Wednesday and Arlington Saturday, followed up next week with showdowns with Notre Dame (January 18) and Woburn (January 20).

Despite its two losses to Austin Prep, Wellesley (4-2-1) stays firm at #3, rebounding nicely with a 3-2 win over Braintree Saturday. The Raiders have Hingham (Monday), Milton (Wednesday) and Peabody/Lynnfield on Friday.

#5 Milton (4-1-3) suffered its first loss with a 3-2 setback to Braintree. The Wildcats then tied up Needham 2-2 on Saturday. Following the key Bay State Herget battle with Wellesley, Milton gets Newton North Saturday.

A 3-2 win over Medway/Ashland was #6 Westwood‘s (6-3-0) only action of the week. The Wolverines hope to knock off top-ranked Notre Dame Wednesday and will see Needham on Saturday.

The first change in this week’s poll comes at #7, where Archbishop Williams (5-2-0) moves up a slug. The Bishops, who blanked Arlington Catholic (4-0) this week, take on Rhode Island’s Mt. St. Charles (Wednesday) and Weymouth (Saturday).

#8 Belmont (6-2-0) is no longer unbeaten, but showed well in losses to D1 Woburn (4-2) and Lexington (4-3). The Marauders will see what they can do with Winchester (Wednesday) and then Reading (Saturday).

New to the D2 poll at #10 is Norwell (5-2-0), whose only losses are to D1 Top 10 teams Barnstable and Duxbury. The Clippers take on Martha’s Vineyard (Wednesday) and Bishop Stang (Saturday).