* Goals by Paul Edson, Timmy McCarthy, Aaron Carroll and Conor Hanlon led Beverly to a 4-1 win over Marblehead, clinching a playoff berth for the Panthers. 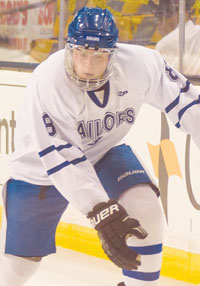 * Wakefield slipped past Woburn 4-3 as Mike Petitto scored a pair of goals. Mike Lucey and Jake Regan added single tallies for the Warriors.

* In the Tri Valley League, Medway got goals from Carter Fisher, Ryan Norton and Danny Harrington in a 3-1 win over Ashland.

* Johnny Oblak scored twice to lead Lincoln-Sudbury to a 4-2 win over Haverhill. Jack Reading and Ben Hankey added goals for the Warriors, who improved to 9-4-0 overall.