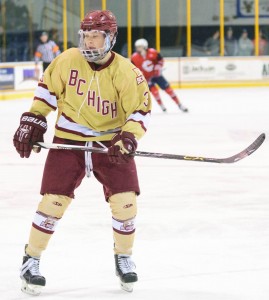 In the Catholic Conference, B.C. High turned back determined Xaverian, 3-1. Jayson Dobay and Mitch Grenier staked the Eagles to a 2-0 lead through two periods and Thomas Kramer’s empty-netter sealed it shortly after Xaverian’s Cam Piorkowski cut the lead to 2-1.

In a non-league match between Top 10 teams, Austin Prep shut down Central Catholic, 4-0, behind a pair of power play goals from Nick Cafarelli and one each from Louis Finnochiaro Jr. and Matt Sacco. Dylan Regan had the shutout.

In the MVC-DCL One, Chelmsford handled Westford Academy, 5-1, behind two goals and an assist by Mario Serra and a goal and two assists from Derek Adamson. Jake Green and Andrew Robinson also scored for the Lions.

Braintree ran its record to 5-0-1 with a 2-1 non-league win against Bridgewater-Raynham. Dave Giuliano and Erik MacDonald netted the goals.

Reading rolled past Lexington, 7-1, in Middlesex Liberty action. Kevin Tobin led the way with two goals while Liam O’Neill had a shorthanded strike and an assist. 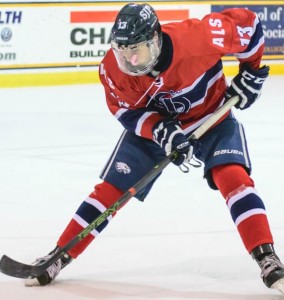 Bridgewater-Raynham fell into a 3-1 hole but climbed all the way back to knock off Falmouth in non-league play, 4-3. Joey McDermott’s first varsity goal was the game-winner.

Burlington got two goals from Anthony Nikolopoulos while Joey DeMayo and Nick Dunne matched for Barnstable in a 2-2 non-league tie.

Malden Catholic packed its offense into the first period as it shut out Xaverian, 3-0, in the Catholic Conference. Nick Botticelli set up goals by Cam Walter and Thomas Albert. Corey Goldstein also scored and Kyle Casey had the shutout.