* #4 Austin Prep won the Catholic Central Large title, holding off #10 St. Mary’s, 1-0. Sophomore Joe Thibodeau had the lone goal for the Cougars, while Robbie Farrell pitched the shutout in goal.

* On Sunday night, #3 Hingham got goals from Trevor O’Brien and Paul Forbes in a 2-2 standoff with #6 Arlington. Joe Scheshareg and Tyler Callahan each had a goal for the Spy Ponders.

* Thirty-five saves from Nico Carere and goals from Ben Fici, Matt Rowan and Matt Brody powered Belmont to a 3-0 upset win over #13 Winchester.

* #12 Reading officially qualified for the post-season with a 5-1 win over Woburn, pulling away with four third period goals. Sean Barbera and Landyn Greatorex each had a a pair of goals, while Charlie Miele had one.

* #7 Framingham improved to 14-2-2 with a 4-1 win over Natick. Mike Tersoni, Hunter Balducci, Will Trischitta and Thomas Duane each had a goal for the Flyers.

* Goals from Sam Murray and Leo Byers, and 15 saves from Alex Trottier helped Andover to a 2-0 win over Central Catholic, sweeping the season series from Raiders. The Warriors now control their own destiny for an MVC/Dual County I league title. 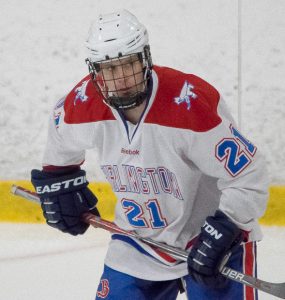 * Friend Weiler‘s goal with less than a minute left in the third period enabled #5 Duxbury to escape with a 2-1 win over Whitman Hanson. James Lawlor had the other Dragons goal.

* Liam Fenton, Joe Aumueller, Aidan Fenton,  Thomas Argento and Sam Ahern each scored once to lead Acton-Boxboro to a 5-3 non-league win over Westboro.

* Falmouth and Barnstable battled to a 1-1 tie down on the Cape. Jack Hamilton had the goal for the Clippers, while Brian Frieh countered for the Red Raiders.