Fresh off a state D2 title, the Warriors have some production to replace up front. Coach Toby Carlow says his club will need to play sound defense and capitalize on the scoring opportunities they get. 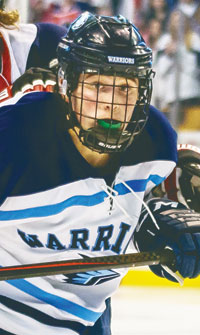 Sophomore Brian Abely is the top returning scorer, coming off a 27-point freshman season and will be a go-to guy. Other key returners up front are senior Steve Christakis and juniors Ryan Johnson, Dylan McNally and Tom Schofield.

Senior Nick Wheeler and junior David Corrigan will be leaders on the blue line, while senior Kevin Walsh looks to take over between the pipes.

The Mustangs return 97% of its scoring from last year, which is a big positive. They will, however, miss the graduated Mike Purnell, a 4-year starter, in goal.

Senior captain Andrew Diebus (30 pts) and seniors Jake Tomsik (22 pts) and Cole Fisher (21 pts) will lead what should be a potent offense that also returns senior Adam Dwyer and juniors James Anderson and Ryan Norton. Sophomore Jeremy Curley is a player to watch after a 19-pt freshman campaign.

Defense looks strong as well with juniors Dominic DiFonzo (13 pts) and Colin Curley (13 pts) holding down the fort, along with sophomore Carter Fisher.

In goal, senior Pat Malloy takes over the starting job.

“Our senior goalie and upperclassmen defenseman, should be solid in our own end,” Coach Dan Geary said. “The team will have more depth than last year, will need to create more offense to be successful.”

Hopkinton returns eight of its top 10 scorers from a school-record 19-win campaign that fell just short in the south semifinals vs. Norwell.

On defense, seniors Will Pickens (captain) and Everett Rolph (14) will lead the way. Also back are Connor Delaney (junior), Spencer Coveney (senior) and Zach Horgan (sophomore).

The Wolverines are ready to face the many challenges, both league and non-league, that will face them this winter as they look to continue their long streak of making the post-season.

Newcomers Ian Williams and Jake Shields hope to have an impact.

Looking to create more scoring opportunities and be solid defensively, Ashland is looking to be more competitive in the Tri Valley League.

“We need to have buy-in for our team concept and build off of the great team chemistry we had last season,” Roman said.

New coach Joseph Robidoux inherits a team was a tick above .500 last winter.

The coach said team discipline and defensive zone responsibility are keys to success.

Jeffrey Moore’s team is looking to be a factor in the Tri-Valley League race.

John Schroeder, a senior captain, will lead the defense. Joe Paolatto is also back as a senior center.

Cole Condon, a junior captain, should provide spark to the offense.

NORTON (5-12-3)
After playing an independent schedule for the first two years of their program’s existence, the Lancers made their TVL debut last season finishing a surprising seventh in the nine-team league. They will look to improve on that mark returning last season’s leading scorer, senior assistant captain Jake Palin (7g, 8a), sophomore Brendan Heayden (4g, 6a) and senior Jack Loranger (6g, 3a). Anchoring the defense will be stand out senior captain Cam Trudeau, senior Chris Towne and sophomore Joe Juliano, who missed the entire 2015-16 season with an injury.
A large junior class will be expected to make key contributions led by three uniquely talented players that play goalie, but also spend time adding depth to the forward lines and defensive pairings when not tending goal. Most of the netminding duties will fall on Tony Cerce (team leading 2.47 GAA) and assistant captain Triton DosReis with spot starts by the leading scorer from the trio in Clint Gallagher (4g, 4a).