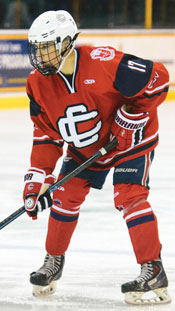 Though the Grey Ghosts are still young, veteran coach Bob Carpenter welcomes back a dozen experienced players. “We do have some experience that should make us competitive in the league,” he said.

The Golden Warriors have made strides each season under third-year Coach Chris Kuchar and will contend for a league title again this winter.  “[We] will continue to focus on our play from the goal line out,” said Kuchar.

At forward, juniors Mike Reilly (12-10-22) and Caedon Dillman (10-12-22) complemented each other perfectly a year ago. The line of cousins Brendan Croston (7-7-14) and Matt Croston and Jeff Hunt (6-8-14) returns intact and will counted on for steady production.

The Hawks scrapped their way into the tournament last year and, with 14 returnees, look for John Maguire’s club to be a tough draw this season.

Defense will be a strength with a quartet of returnees – seniors Charlie LeClair and Cam Egan, junior Gerard Jelloe and sophomore Mike Burke. Senior Chris Alrie and junior Kyle Penton are competing for the goaltending job.

The Indians lost heavily from last year’s club and Coach Jim Egan will lean heavily on senior captain and veteran goalie Scott Murphy to lead the way, especially in the early going.

Senior Frank Manupelli returns as the most experienced forward. He will team with junior Ryan Jackson and sophomores Ryan Broulliette, Joe Lamarca and Anthony Lamarca to form the nucleus of the offense. Junior Joe Chasse is the lone returnee on defense and will be counted on to stabilize a young group that includes a blend of five players who are either moving up from JVs or are new freshmen.

The Lions reached the North Sectional quarterfinals last season and new Coach Kevin Leonard is hopeful a younger team – there could be as many as 16 freshmen, sophomores and juniors on the roster – can extend that success.

“We have a team that has been very energetic and hard-working and are looking to continue the success last year’s team had,” said Leonard.