No. 6 Central Catholic kicked off the New Year in style Wednesday, toppling No. 4 Austin Prep, 4-1, behind two goals and two assists from Corey Webber and Colin Soucy’s 23 saves. Alex Lester and Lloyd Hayes also scored for the Raiders, who play at No. 13 St. John’s Prep Saturday (Ristuccia, noon). Junior Shawn MacBurnie scored two goals, including the game-winner with 14 seconds to play, and assisted on tallies by Dante Maribito and Jackson Allard as No. 18 St. Mary’s surprised No. 7 Archbishop Williams on the holiday, 4-3. Senior keeper Bailey MacBurnie continued his stellar start to the season with 37 saves. No. 9 Arlington Catholic captured the Winter Showcase Classic title with a 4-0 whitewash of unranked Andover earlier this week. Senior John Richard had 17 saves in the shutout. Junior Ryan Smith, the Tournament MVP, and sophomore Andrew Somerville both had a goal and an assist for the Cougars.

Anthony Niklopoulos’s hat trick powered No. 14 Burlington past No. 15 Barnstable, 4-2. 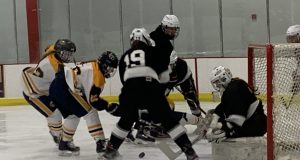 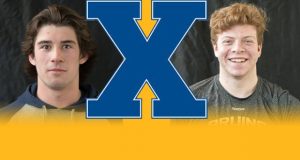 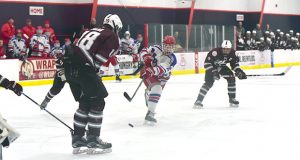