Franklin hopes to continue its impressive play in the six-team Kelley Rex Division, but there are plenty of suitors ready to take over. The Davenport Division has just three teams this year, including defending Mass. D2 state champ Canton. The league has new coaches in Franklin (Anthony Sarno) and Oliver Ames (Mike Zucarelli).

The Blue Bombardiers will benefit from a solid cast of returnees and a couple of key additions as they look to make a return to the postseason.

New coach Andrew Sarno takes over the Panthers after five-year stint as a Weymouth High assistant and JV coach. Blending veterans from last year’s South Sectional finalist with newcomers will be a crucial part of the transition to a new staff and its systems.

“It will be a work in progress and we will look to develop solid team chemistry with a relentless work ethic, staying true to consistency and discipline in an environment where effort and attitude is paramount and not up for discussion,” Sarno said.

The Panthers will look to seniors Shane McCaffrey, Kevin O’Rielly and Shea Hurley along with juniors Declan Lovett and Conor O’Neil to get the offense going. Juniors Sean Connelly, JT Dwyer and CJ Jette and sophomore Dylan Marchand step up from the JVs.

The defense features returning Hockomock League all-star Tom Tasker along with senior goaltender Ray Ivers. Experienced junior Joe Leblanc also returns on the back line. Junior Will Sheehan returns to the program after a year with the South Shore Kings.

Mike Zucarelli takes over the Tigers program this season and inherits a solid team that gave league rival and eventual state champion a tough battle in the Division 2 South quarterfinals.

A strong senior class will be led by wings Jake Gottwald, Duncan Pereira and Cam Perron, as well as centers Hunter Costello and Brad Powers.

Defensively OA will be able to lean on senior returnees Ryan Gottwald, Jach Manganaro and Matt Nosalek. Senior Owen Connor will be in net.

Coach Kris Metea will have a young and small, but fast team as the Tigers try to navigate the waters of the tough Hockomock and get back to the postseason.

Taunton got a nice infusion of transfers entering the season, welcoming sophomores Jack DeMoura and Michael Lucier from Coyle & Cassidy, as well as Steven Roderick from Bristol-Plymouth.

Metea sees good chemistry, with playing a simple game with a hard-working mentality as keys to success for this season.

Seniors Kyle Gray and Ethan McGuire lead a group of six back on defense for coach Paul Carlow, while seniors Nate Ihley and Jesper Makudera both return with experience in goal.

KP is shooting for a return to the post-season after missing the tournament by a point last year.

Senior goalie Sean McCafferty returns to lead the Hornets, looking to build off a stellar junior campaign that saw him post four shutouts while posting a 2.03 gaa and .918 save pct.

Seniors, Kevin Belanger (5-11-16) and Jake Lund (10-7-17) are back to lead the offense. Stay-at-home senior defensemen Joe Troiano, Conor Benoit and Jake Gormley line up in front of McCafferty

The 2018-19 season couldn’t have gone much better for the Bulldogs, who stormed through the competition to win the second Division 2 state championship in program history.

Now coach Brian Shuman knows everyone will be gunning for his squad, but he believes there are more than enough key players back to make another run at it. Seniors Johnny Hagan (21-31-52), Chris Lavoie (15-12-27) and Timmy Kelleher (12-10-22) all were among the scoring leaders last season, while senior Jack Connolly (8-17-25) and Owen Lehane (4-10-14) also were big two-way contributors in the blue line.

Senior Ronan O’Mahony (0-9-9) is another solid returning defenseman, and senior Tommy Ghostlaw (5-8-13) also is back to provide scoring depth at forward.

In addition to losing dynamic scorer Ryan Nolte, one of the biggest questions for Shuman will be replacing solid goalie Mike Staffiere.

Home Rink: The Warriors could be poised for the best season in program history and will be looking to reach the Division 3 South tournament for the third consecutive season.

The big key for coach Mark Cedorchuk will be having Davenport MVP Espen Reager (2.19 GAA, .930 SP, four shutouts) back in goal. He will need to come up big again behind a young defense led by senior Kyle McGinnis. Junior Mike Grace, sophomores Dylan Pothier, Eoin Reager and Tom Marcucella, and freshman Alex Coviello will round out the blue line.

The Warriors should be dangerous offensively with senior Ron MacLellan and junior Kirk Leach leading the way. Senior captain Sebastian Ricketts also returns along with sophomore Jack Watts and junior Brady Daly, while Ryan Jacobs transfers in front Bishop Feehan and should be a big immediate addition.

Third-year coach Ben McManama expects the Red Rocketeers will be a hard-working team that is strong on the defensive end of the ice.

It helps to have a pair of strong, veteran senior blueliners in Will Yeomans (0-5-5) and Jack McNeany (4-8-12) to spearhead the defense. Offensively, senior center Dennis Morehouse (15-4-19) and Jack Connolly (6-7-13) are the top returnees, but McManama will be looking for his team to find ways to generate more scoring.

Sophomores Nick Longa (center), Brady Sarro (left wing) and Austin Comery (defense) are among the newcomers to watch for the Red Rocketeers. 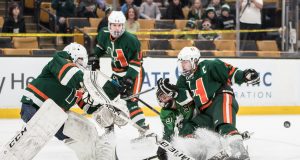 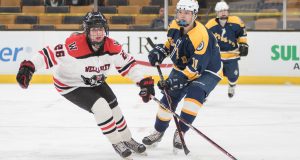 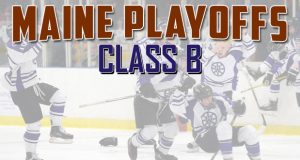