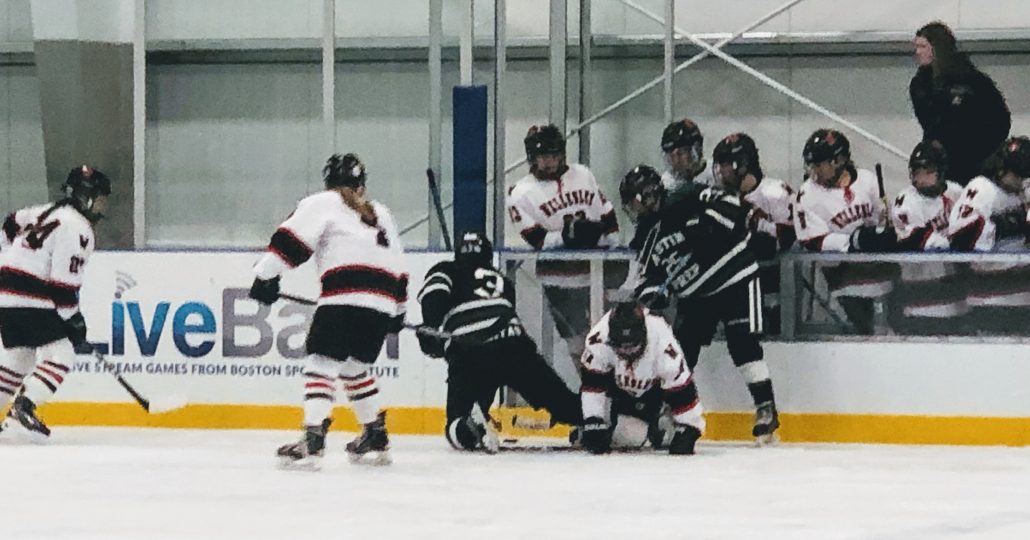 Austin Prep and Wellesley players battle for puck along the board during the Raiders 3-1 win in a battle of the top-ranked teams in D1 and D2.

The HNIB News top-ranked Division 1 and 2 teams took the ice at the Wellesley Sports Center looking to make a statement against arguably the best competition each will face all season.

The Cougars earned a one-goal win in the first meeting between the two back on December 18 at Matthews Arena, but Wellesley is starting to gear up for a run at a third straight Division 2 state title and a sixth appearance in the last seven title games. Nothing would give the Raiders a boost through any potential mid-season malaise quite like a win over an equally-as-hungry AP team.

Meanwhile, a second win for Austin Prep this season over the two-time defending D2 champs would surely provide a nice mid-season spark in its own quest to get back to the Division 1 state title game for the third time in five seasons.

From the drop of the puck on Wednesday, Wellesley was in control. The Raiders peppered AP goalie Lauryn Hanafin, and eventually broke through for three goals, earning a dominant 3-1 victory.

Hanafin was able to keep Wellesley off the scoreboard until late in the second period when Mackenzie O’Neil finally broke the ice.

After an initial shot from Emily Rourke coming off the left half wall, O’Neil crashed the net and found a way to push the puck past Hanafin amongst a see of green jerseys to give Wellesley the 1-0 lead with 2:30 left in the period.

Just moments later the Raiders went to the power play. After cycling the puck, O’Neil let a shot go from the right point. Bliss Vernon got an initial tip on it, but as the puck slowly dipped towards the net Rourke was able to get a tip of her own, and the puck fluttered past Hanafin making it 2-0 with 56.4 seconds left in the second.

“Everybody knows Austin Prep is a huge hockey school and everyone looks at them as a winning team every single year,” Rourke acknowledged. “We’ve been playing them I think twice a year since my sophomore year and we’ve never come out with a win until tonight, and every single time we’ve always said we’ll get them next time. We’ve tried not to make excuses, if they won a game they were the better team.

“I think this year we came in more positive and with more energy and I think it really paid off. The first time we played them I felt like we dominated them, but this time I didn’t. We tried to not get too comfortable, not get too confident this time and really play our game and not focus on who I thought would win or who was dominating, it just felt like it was 0-0 the whole game.”

Despite the one-sided nature of the first two periods, Austin Prep got a pretty one-timer goal in the slot from Monique Lyons off a beautiful feed from Isabel Hulse with 11:55 left in the third to make it a one-goal game at 2-1.

As they did all night, Wellesley’s top defensive pairing of Erin Fleming and LuLu Rourke completely shut down the Cougar offense, barely allowing a singe puck to even enter the slot. With the defense in lockdown mode and goalie Liddy Schulz (8 saves) making some timely stops, the Raiders were able to hold AP off until an empty net goal from Danielle Cimino iced the game with 1:10 remaining.

With the second half of the season now officially underway, Wednesday night’s win by Wellesley was not only a statement win for arguably the best team in all of Massachusetts – Division 1 or 2 – but a huge jumping off point with a few tough games on the schedule still lurking.

“We felt like we had something to prove tonight,” added Donato. “I think it’ll be a bit of a spark for us, but we’re not done. We’ve still got Braintree, we’re going to the Newburyport tournament with Masconomet, Tewksbury/Methuen and Shrewsbury, we’ve got Woburn…