When Notre Dame of Hingham girls hockey coach Jean-Yves Roy took over the program heading into the 2013-2014 season, he inherited a club that had gone 2-12-6 the year before.

Roy, a former star forward at UMaine who played 61 NHL games, including 54 with the Boston Bruins, inherited a nice nucleus to work with. He implemented his systems and the Cougars improved to 5-9-5 and played everyone tough in year one. 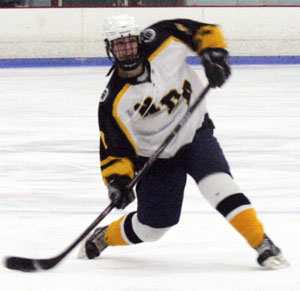 Last winter, NDA finished the regular season at 13-4-3, won the Catholic Conference and had high expectations for the post-season. They won their preliminary round tournament game, but then fell in the first round to Medfield.

With a host of senior veterans that had been with the team since their freshman seasons, coupled with what looked to be a strong group of incoming talent, there was optimism that 2015-16 could be an even better season for Notre Dame.

So far, it has been.

Heading into the first weekend of February, the Cougars are 12-2-0 and ranked #1 in Division 2, a spot they have held most of the season. They have outscored their opponents by a 59-18 margin. NDA owns wins over solid D1 teams like Barnstable (2), St. Mary’s, Needham, Hingham and Reading, and defending Connecticut co-state champion East Catholic. Both of the Cougars losses have come to Division 1’s top team – Arlington Catholic. 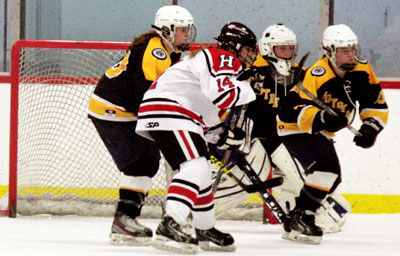 “We know we could have and should have gone deeper in the tournament last year and the girls got a taste of it,” Roy said. “With the core group coming back, we definitely expect to have a deeper run this year.”

That core group is led by senior forward Caroline Hocking, senior defenseman Haley Marshall and senior goalie Lizzy Bell, all varsity players since freshman year. All three have been instrumental in the team’s success, as have all of the team’s returners.

“Each and every one of of the returning players have done their job and beyond,” Roy said. “It is always easy to look at stats, but the players’ contributions go much further than that. My goalie – Lizzy Bell – has been great. Our defense has been very tight and our forwards have put up good numbers.” 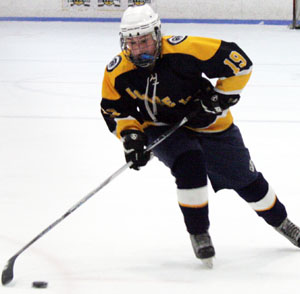 Notre Dame has also been blessed with an impressive influx of young talent that has stepped right in and contributed. Roy’s daughter Gabrielle, an eighth-grade forward, is one of the team’s leading scorers.

The Cougars are in the midst of a 10-day stretch without playing a game. They beat Catholic Conference foe Fontbonne (6-2) on January 30 and don’t play again until February 9 when they host Shrewsbury.

Could a long layoff in the middle of the season slow down the team’s momentum? 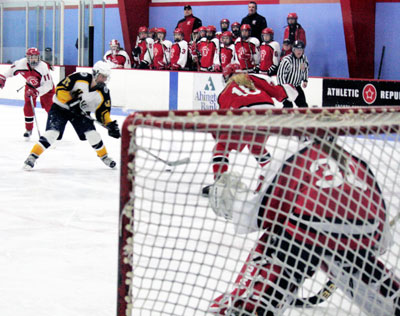 Gaby Roy gets set to fire shot against Barnstable

“I guess only time will tell but I am not worried about the team’s focus,” Roy said. “Our ability to stay focused regardless of the situation has been one of our strengths this year and I don’t anticipate the layoff being a factor. On the other hand, it could turn out to be a great benefit as we are nursing a few minor injuries and dealing with a number of players out sick.”

While Notre Dame is looking towards a deep run in the post-season, there is still a tough road to hoe before getting there.

The Cougars’ remaining regular season schedule is daunting. After playing Shrewsbury, Notre Dame has Fontbonne again, Milton in the first round of the Cougar Classic, and then either Austin Prep or Longmeadow in the Classic finals. The last week of the regular season will see games against D1 powers Duxbury and Austin Prep (perhaps for a second time), both top five teams in Division 1.

“We are looking forward to the challenge,” Roy said. “The girls believe that they can beat any opponent on any given night, not because I told them but because they have experienced it. This is the perfect schedule to end the regular season and get ready for tournament action.”

(All photos courtesy of Bob Bell)