* Canton avenged its only loss of the season, getting two goals from Maya Battista, and singles from Audrey Koen, Allie McCabe and Lizzie Tassinari in a 5-1 win over King Philip.

* Two goals each from Finley Crosby and Kate Brewster powered Barnstable to a 6-1 win over Martha’s Vineyard. Claire Hazard and Ally McEneany also had goals for the Raiders.

* Lexington grabbed its first point of the season, tying up Reading 2-2 with goals from Erica Riley and Fiona Kelly. Maddie Rzepka and Mia Bonfilio had goals for the Rockets.

* Medway Co-op closed its season in fine fashion, blanking Norwood 2-0 Saturday with goals from Maggie Lester and Emilie Infanger, then following up on Sunday with a 3-0 blanking of Dover-Sherborn/Hopkinton, as Lester and Infanger scored again, along with Jenna Fitzsimons. Jenna Shutt registered the shutout in each contest.

* Peabody/Lynnfield/North Reading rolled to a 6-0 win over Gloucester behind two goals from Paige Thibodeau, and a goal each from Catie Kampersal, Hannah Gromko, Chloe Considine and Avery Bird.

* Boston Latin got past Cambridge, 4-1, as Ally Keough, Maeve Murray, Ava Enright and Keira Bruen each had a goal.

* Bella Babstock and Angelisa Caceda both scored twice in Waltham’s 8-0 win over Wayland/Weston.

* Natick downed Wellesley for the fourth time this season, edging the Raiders 3-2 with goals from Caroline Gates, Makenna Doucette and Emma Tavilla. 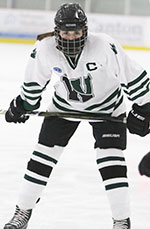 * Two goals from Emma Hunt and lamplighters from Amanda Lewandowski, Libby Carter and Nina Iannuzzi led Franklin to a 5-2 win over Stoughton/Sharon.

* Elsa Wood and Hadley Wales had the goals as Marblehead shaded Beverly/Danvers, 2-1.

* Back on Thursday, Westwood’s Hannah Blomquist became the latest member of the 100-career point club, doing so in the Wolverines’ 4-1 win over Medfield/Norton.