* In a wild opening game of the Patriot Cup, Marshfield advanced to Saturday’s quarterfinal round with a 4-3 win over Scituate in a game that wasn’t decided until 15 rounds of a shootout. Emma Kennedy had the deciding shootout goal for the Rams. She had both of Marshfield’s goals in the shootout, while Kiera Modder had Scituate’s lone goal. Goaltenders McKenna Dans for Marshfield and Molly Walsh for Scituate were both outstanding. Maija Kastrud, Josie Keeler and Maddie Mosca had regulation goals for the Rams, while Modder, Haley McCarthy and Stella Spaulding countered for Scituate.

* In the Hockomock League, King Philip stunned Canton, 4-2, handing the Bulldogs their first loss of the season. Avari Maxwell scored two goals, while Kelly Holmes and Sydney O’Shea each contributed a goal and two assists. Mallory Johnston was solid in goal for KP.

* Arlington got a pair of goals from Maddie Krepelka in a 5-1 win over Reading. Makayla Doherty, Gabbie Russo and Shea O’Day also scored for the Spy Ponders. 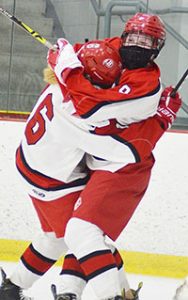 * Falmouth remained unbeaten in the Cape & Island League, getting two goals from Ryann McDonald to edge rival Sandwich, 2-1, in a battle of D2 Top 10 teams. Adrianna Kelsch scored the lone goal for Sandwich.

* Barnstable slipped past Dennis-Yarmouth, 3-1, with goals from Claire Hazard, Ally McEneany and Laura Cogswell each had a goal for the Raiders.

* Notre Dame Academy closed out its season with a 6-0 shutout win over Norwell. Christine Landry had a hat trick, Laura White scored twice and Emily Coughlin once for the Cougars, who finished at 6-1-2.

* Matignon got a hat trick from Lizzie Greeley, and single tallies from Tia Picardi,  Molly McConnell and Erin Bennett in a 6-1 win over St. Joseph Prep/Mt. Alvernia.

* Riley LeClair scored with just three seconds left to give Bishop Feehan a 3-3 tie with Bishop Stang. Alana DiPlacido and Alivia Fitzgibbons also had goals for the Shamrocks. Mikayla Brightman, Lexi Yost and Emily Curran scored for the Spartans.

* Kaci Ryder scored four goals to power Shrewsbury to a 5-0 shutout win over Pope Francis. Maddie Mrva had the other goal for the Colonials.

* Jess McPherson scored in overtime to give Waltham a 3-2 win over Wayland-Weston. Isabella Mondolfi and Julia Guden also had goals for the Hawks.

* A goal by Erin Irons late in the third period was the difference in Newburyport’s 1-0 win over Beverly.