The Cape Cod Furies and Barnstable both advanced in the Cape & Islands Tournament Thursday. The Furies edged Dennis-Yarmouth, 2-1, in double overtime, while Barnstable rallied to take down Martha’s Vineyard, 5-3. 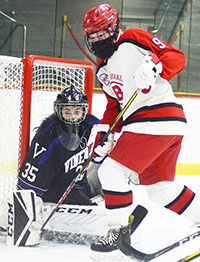 Down 1-0 in the third period, the Furies forged a tie on a goal from Charlotte Manganaro, and then won in the second overtime, thanks to a rebound goal by Julia Werner.

After a scoreless first period, the Dolphins grabbed a 1-0 lead on a Hannah O’Dowd strike.

The Furies will now play top-seeded Falmouth in a semifinal game on Saturday (3:30pm, at Falmouth).

In the earlier game, visiting Martha’s Vineyard jumped to a 2-0 lead after the first period at Barnstable, but the Raiders roared back for the win. Claire Hazard notched the game-winner in the third period. Ally McEneany scored a pair of goals, and Kate Brewster and Laura Cogswell one each.

Vineyard’s Paige Anderson had a pair of goals in the loss.