Last week, St. Mary’s head coach Frank Pagliuca earned career win #200 in his team’s win over Masconomet. He may have enjoyed win #201 even better. That came Saturday, when the Lady Spartans upset top-ranked and previously unbeaten Arlington Catholic, 1-0, on the road. Defenseman Ashley Wojewodzic scored the game’s only goal during a first period power play and goaltender Emily Stephenson made 31 saves. 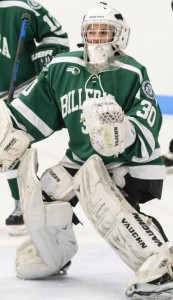 Austin Prep got a pair of goals apiece for Kylie Currier and Annie Richards and yet another shutout from goalie Caty Flagg as the Cougars blanked Archbishop Williams, 4-0.

D2 #2 Wellesley made a big statement Saturday in its key Bay State League Herget Division battle with Milton, cruising to an 8-1 win behind the two-goal performances of Kiely Noonan, Carly Boyle and Katie Hawkinson.

Falmouth surprised Duxbury in the SEMGHL Coastal as Ericka Meissner fired home three goals. Caroline Coyne and Rachael Curtis both had a goal for the Clippers.

Masconomet got goals from Riane Vatcher, Tracy Long, Izzy Sarra, Syndey Sheerin and Sami Kelleher in a 5-1 win over Medford.

Reading was impressive in a 4-0 win over Winchester. Ainsley Cohen scored two goals for the Rockets, while Tori Grimmer and Rylie Coleman each scored one.

Alyssa Sullivan scored three goals to lead Hingham to a 5-3 win over Barnstable. Gianna Merian and Julianna Lynch added one goal each for the Harborwomen.

Goals from Margeaux Berthiaume and Sarah Ahaesy had the goals as Bishop Stang earned a 2-2 tie with Nauset.

Fontbonne slipped past Ursuline, 2-1, with goals from Katie Nolan and Mary McLoughlin.

Medfield tied Westwood 2-2 as Maya Mangiafico and Sarah Graham had goals for the Warriors.