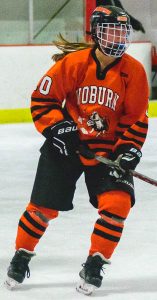 – Austin Prep wrapped up the Catholic Central League title with a 3-1 win over St. Mary’s. The Cougars got goals from Ellie Richards, Courtney Colarullo and Ella Saracco in the win. Mia DiBiasio had the lone goal for St. Mary’s.

– Woburn wrapped up its share of the Middlesex League Liberty Division title with a 5-1 win over Lexington. Marissa Gregory scored two goals, while Lily Mallard, Georgie Santullo and Cassidy Connolly each had one for the Tanners.

– Reading grabbed the other share of the ML Liberty crown, besting Belmont 5-1. Michaela Boyle had the hat trick for the Lady Rockets, while Sydney Conte scored twice. Reading (15-2-1) finishes up its regular season this week at the Hingham Showcase. 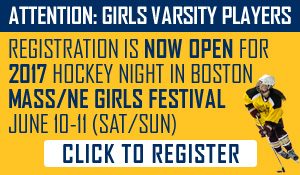 – Archbishop Williams got a late goal from Chelsea Taxter to tie it and one from Mackenzie Heath to win it in a 3-2 win over Fontbonne.

– Delaney Couture continued her big season, scoring two goals in Shrewsbury’s 3-1 win over Masconomet. Lily McManus also had a goal for the Colonials.

– Burlington blanked Wilmington 3-0 as Rylee Glennon scored all three goals and Megan Gaffney had the shutout in the nets.

– Jess Chicko fired home four goals to power Haverhill/Pentucket/North Andover to a 5-0 win over Lincoln-Sudbury. Rebecca Harty also had a goal for HPNA.

– Kelly Golini had a pair of goals, and Brenna Greene, Lydia Pendleton, Josie Mendeszoon and Madison Robillard each had one in Tewksbury/Methuen’s 6-1 win over Waltham.

– Kassidy Hickey scored twice as Dedham scored a 4-4 tie with Milton. Sarah Stapleton and Kylie McCarthy each had a goal for the Marauders. Elena Kapolis had two goals for Milton, while Adrienne Shea and Kat Buchanan each had one.

– Two goals from Andrea Wilbur and one from Jenna Malone powered Walpole to a 3-2 win over Norwood.

– Canton doubled up Ursuline 4-2 as Maggie Malloy scored a pair of goals. Lauren Fitzpatrick and Andrea O’Neil each scored once for the Bulldogs.

– Goals by Bridget Crane and Christian Gesualdi allowed Arlington Catholic to tie up Connecticut’s East Catholic 2-2 in a non-league battle.

– Phoebe Lawrence and McKenzie O’Neil each had a goal as Wellesley got past Natick, 2-1. Molly Burnes had the lone goal for Natick.

– Sandwich got goals from Trinity White, Kari Gould, Victoria Viseglio, Marilena Currey and Molly Dwyer in a 5-1 win over BMW-ORR.

– Goals by Nicole Schneiders and Rachel Shu gave Westwood a 2-1 win over Medway/Ashland.