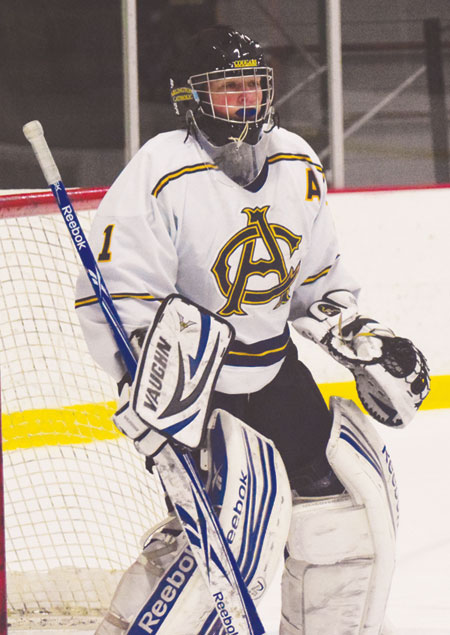 – Arlington Catholic flexed its muscles in a big way, defeating a good Fontbonne team by a surprising 8-0 count. Senior Adrieana Rossini led the attack with a hat trick. The Cougars also got goals from Erin Healy, Meg Halloran, Jessica Piracini, Margaret Sullivan and Juliana Dolan. Katherine Crane earned her fourth shutout of the season in goal.

– Two goals each from Kelly Ferreira and Madison Haberl, and one from McKenzie Haberl powered Falmouth to a 5-0 win over Sandwich.

– Kate Holmes and Casie Curtin had the goals as King Philip remained unbeaten with a 2-0 win over Martha’s Vineyard.

– Hannah Tracy and Mel McAleer scored a pair of goals each to power Whitman-Hanson/Silver Lake to a 6-0 win over Scituate. Shannon Elwood and Mary Kate Webb also scored, and Melissa Crone got the shutout in goal.

– Duxbury utilized a hat trick from senior Jane Dudley to take care of Beverly/Danvers, 5-3, in a clash of two D1 Top Ten clubs. Nicole Quinlan and K.C. Williams also had goals for the Dragons. Kristen McCarthy, Marlee Hamor and McKinley Karpa scored for the Panthers.

– Joanna Olson scored three goals, and Jessica Leone had the other as Andover took down Acton-Boxboro, 4-1, in another battle of D! Top Ten teams.

– Goals from Erica Lissner and Georgie Santullo gave Woburn a 2-0 win over Lexington in the Middlesex League.

– St. Mary’s continued its strong play of late, riding goals from Sam Callahan and Vanessa VanBuskirk and a shutout in goal from Brittany McPherson to a 2-0 conquest of Hingham.

– Barnstable got past Canton, 2-1, on the strength of goals from Danielle Desrosier and Callie Rogerzenski. Mary McNeil had the lone goal for Canton.

– Dennis-Yarmouth blanked Bishop Stang, 2-0, as Katie Donohue and Sam Shastany had the goals.