#7 Boston Latin stayed alive in the MVC/Dual County League II race with a solid 4-0 win over #2 Tewksbury. The Wolfpack got two goals from senior Jimmy O’Leary and single tallies from Will Ahearn and Brendan McLaughlin. 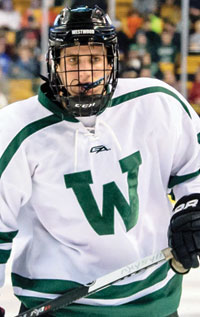 Westwood continued its solid play, as a goal from RJ Messineo allowed the Wolverines to tie #3 Medfield, 1-1. Matt Treiber had the lone goal for the Warriors.

Scituate got goals from Tommy Marhoffer, Ryan Harrigan and David Murray in a key 3-1 win over #10 Pembroke. Shane Murphy had Pembroke’s goal.

#9 North Reading got a pair of goals from Tyler Calos and one from Matt Correiri in a 3-0 shutout win over Lynnfield.

Liam Lyons scored twice, and Eddie Mahoney and Sal Costanzo added one each as Gloucester knotted up #11 Peabody, 4-4.

North Andover punched its ticket to the post-season with a 2-0 shutout win over Haverhill. Tyler Buonopane and Brett Kochanski scored goals for the Scarlet Knights.

Masconomet blanked Beverly, 3-0, in a non-league battle as Nick Pease, Andrew Gotts and Garrett Lafata all had goals.

#6 Bishop Feehan clinched the EAC title outright with a 4-1 win over Somerset/Berkley. Kyle Browne scored two goals to lead the Shamrocks attack. Chris LaValley and Jack Callahan each had a goal as well.