After being overlooked by the Division 1A Tournament Committee on Selection Saturday, St. Mary’s of Lynn could have let its disappointment ruin a terrific regular season and exited quietly from the post-season. There are several examples of this happening to teams before them.

Rather than lament their lot, the Catholic Central Large co-champion Spartans re-focused and went about the business of securing the next available prize, a Division One State Championship. Now only South champion Franklin stands between coach Mark Lee’s club and that goal.

“We are excited to be playing on the last day of the hockey season and look forward to this challenge,” Lee said. 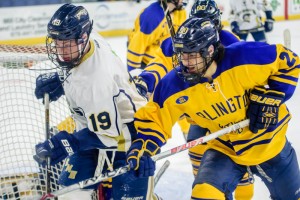 While No. 11 Arlington Catholic fired the opening salvo in Monday night’s North Sectional championship game at The Tsongas Center, the No. 4 Spartans won the battle, 3-1, capturing the program’s first D1 North crown while completing a three-game season sweep of their league rivals. St. Mary’s won both regular-season games, 2-0 and 4-1, 10 days apart in mid-January.

With the victory, the Spartans (21-5-0) are now guaranteed to finish no worse than tied for the most wins in Division One — only B.C. High can match them — and will seek their first State championship Sunday (TD Garden, TBD). Arlington Catholic, the defending Sectional champion, which had knocked off three straight Middlesex Liberty Division heavyweights (Woburn, Winchester and Reading) to reach the title game, finishes 11-9-4.

“St. Mary’s played extremely well; they were a step ahead all night. The better team won. We didn’t have the legs. We ran out of gas. I looked at the scoreboard in the first period and we were being outshot, 10-2, and I said ‘Holy smokes, we’re winning.’ We had one chance to score and we did,” said AC coach Dan Shine. “After graduating so many from last year, our identity became one of a team that was going to outwork everyone and let the chips fall. It took a heroic effort to get to the North final.” 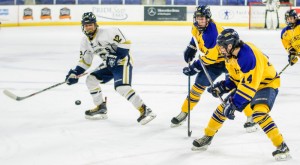 Still, the Cougars struck first, taking a 1-0 lead on their first shot of the game when senior defensemen Kevin Morrissey snapped his 11th of the season past Spartans’ junior goalie Andrew LoRusso from the right faceoff circle at 3:45 of the first period, set up by senior Matt Solviletti. LoRusso wouldn’t yield another but AC junior Matt Anderson wouldn’t surrender anything for a good long while.

“You only go as far as your goaltender in post season and Andrew has really stepped up his game for us. He has been the backbone of this run along with an entire team giving everything they have to be successful,” Lee said.

“We never mustered anything. We moved the puck pretty well but never had a really good chance. Great kill by them,” Shine said of St. Mary’s.

After the kill, sophomore Ryan Turenne tied it with 5:04 left in the period, assisted by senior Tom Frati and junior Mike Desmond. That was followed by junior Dante Maribito’s goal with 1:37 left in the period that put the Spartans ahead for good. Senior captain Connor Foley’s power play goal at 5:21 of the third period, from Maribito and junior Andrew Kreamer, sealed it. Maribito and Foley continue to share the team lead with 21 goals apiece.

“Tom Frati has had a very good post season. He had both goals against Chelmsford [2-1 quarterfinal win]. Connor Foley is one of only four seniors and missed almost his entire junior year with a broken collarbone. He is one of the best captains I have coached in my 30 years. He leads not only by example but always in a positive way,” Lee said.

The Spartans’ defense has been superb throughout the post-season as they outscored Sectional opponents by an 11-4 aggregate margin. Kreamer, senior Brady McLaughlin (7-14-21) and junior Marc Zampanti (13 points) have been stout on the blue line.