It’s been an interesting first half of the week in Division One with a number of high-profile games on the docket the past few nights, including a pair of Top 5 head-to-heads on Wednesday. Here are some highlights:

No. 1 B.C. High corralled high-powered No. 4 Pope Francis, 3-1, at the Clark Center. The Eagles got single goals in each period, in order from sophomore Troy Ladka, senior Billy Roche and junior Ian Murphy to improve to 12-0-3. 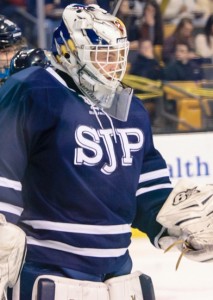 No. 3 St. John’s Prep pinned a 5-0 shutout on No. 5 Austin Prep behind senior goalie Kyle Martin to qualify for post-season. Senior Danny Tighe scored twice while seniors Kyle Lynch, Mitch Shaheen and Josh Cole had a goal each for SJP, now 10-2-3.

No. 11 Framingham squeezed past No. 9 Braintree, 2-1, to take over first place in the Bay State Carey race. Junior Scott Swennes had the game-winner on the power play late in the third period. Sophomore Austin Bellefeuille also scored and junior goalie Owen Parker had 18 saves.

In the Middlesex Liberty Division, No. 16 Arlington – which had dropped two of three coming in – upended No. 10 Reading, 3-2, behind goalie Jack Pinard. The Spy Ponders opened a 3-0 lead on goals from Mike Curran, Dara Conneely and Kevin Ouellette and took three of four points in the season series. 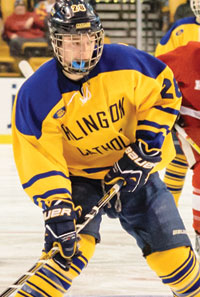 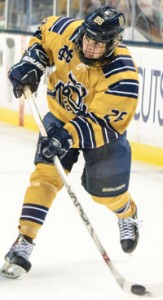 Arlington Catholic doubled up Billerica, 6-3, as senior Matt Solviletti continued to impress with a hat trick and an assist, giving him 14 goals on the season. Senior defenseman Kevin Morrissey contributed two goals and two assists for the Cougars.

No. 18 Hingham played one of its best games of the season, unleashing 41 shots in its 6-2 decision of No. 8 Winchester. Junior Jeff Gordon and sophomore Frankie Higgins had two goals each for the Harbormen.

No. 2 Malden Catholic stepped out of state and turned back Fairfield Prep (CT), 3-2, behind a pair of Pat Harrington goals and one from Nick Botticelli.