A couple of significant upsets of teams in the Division 1A conversation and the clinching of a few league championships marked a busy Wednesday night:

Unranked Arlington Catholic sustained its post-season hopes and jeopardized No. 5 Austin Prep’s Catholic Central Large title hopes with a 2-1 win. AC got goals from Kevin Morrissey and Mason Beecher and a 19-save performance from Matt Anderson. AP now must defeat Archbishop Williams in its final league game on Feb. 21 to win an outright CCL title.

Waltham qualified for the post-season with its 2-1 upset of No. 11 Central Catholic in Merrimack Valley/Dual County Large play. The Hawks’ goals came from Chris Egan and Adam Becker while Brendan Devlin piled up 29 saves.

No. 6 St. Mary’s (L) took advantage of Austin Prep’s loss to bounce into first place in the Catholic Central Large for the time being with its 4-1 win against Archbishop Williams in its final league game. Junior Dante Maribito scored two goals while Mike Zampanti and Mike Desmond had one each.

No. 8 Framingham claimed the Bay State Conference Carey Division crown with its 5-1 win against Wellesley. Sophomore Austan Bellefeuille had the hat trick and junior Owen Parker made 22 saves. Senior Jamie Brigham and junior Scott Swennes also found the net for the Flyers.

No. 9 Reading and No. 13 Woburn played to a 2-all tie in a battle of Middlesex League Liberty Division heavyweights. Jay Gallagher gave the Rockets a 1-0 lead in the second period; the Tanners’ Evan MacDonald and Christian Brinkley countered late in the period. Reading’s Kevin Tobin forged the tie with a goal in the final two minutes.

Pat Stapleton broke a 1-1 tie midway through the third period and Xaverian went on to a 3-1 non-league win against No. 19 Marshfield to keep its post-season hopes alive. 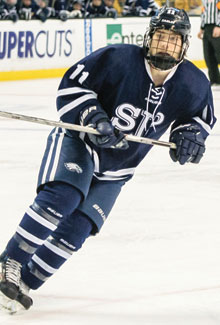 No. 15 Chelmsford rolled to a 7-0 non-league win against Triton behind a goal and assist apiece from Mario Cerra and Al McPherson. Blake Alber (24 saves) had the shutout.

Newburyport clinched the Cape Ann League crown for the third time in four years and qualified for post-season play with a 4-1 win against Amesbury. Austin Elmore, Ben Peffer, Pat Leary and Tyson Gudaitis had the goals.

In the Bay State Carey, No. 10 Braintree and No. 17 Walpole seemed headed for a scoreless tie until the Wamps’ Ben Burke scored with 98 seconds to play for a 1-0 Braintree win. Dave McDonough netted his sixth shutout with 20 saves.