Undefeated No. 1 Pope Francis of the Catholic West is the third team to occupy the top spot in three weeks after claiming the Peter Frates Winter Classic for the second time in three years. The Cardinals edged host St. John’s Prep in the title game after shutting out Central Catholic in the semifinals. League foe St. Peter Marian and Bishop Hendricken of Rhode Island are on the docket this week. 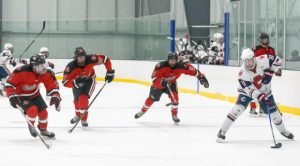 No. 2 B.C. High suffered its first blemish, falling to St. John’s in OT in a Frates Classic semifinal, a 2-2 tie under MIAA guidelines. The Eagles rebounded with a dominant consolation game win against Central Catholic and have a full week to prepare for next Saturday’s titanic Catholic Conference clash against Malden Catholic.

It’s been a light schedule to start for No. 3 Malden Catholic, which squeezed past Xaverian, 3-2, in its only holiday week action. The Lancers swing into Catholic Conference action in earnest this week with home dates against both St. John’s Prep – a rematch of last year’s 1A title game – and B.C. High.

No. 4 Austin Prep of the Catholic Central Large continued doing what it does best – fly under the radar while playing superb team defense. Following this week’s shutouts of Arlington Catholic and Billerica, the Cougars have outscored their opponents, 23-4. Next up is a non-leaguer against St. John’s of Shrewsbury.

No. 5 St. Mary’s (L) is gathering steam, having won three straight. The Spartans have a Catholic Central Large date against Archbishop Williams on Wednesday, followed by Saturday’s intriguing non-leaguer against Andover.

Independent No. 6 Hingham is finding the range on offense. The Harbormen have scored 16 goals during their three-game winning streak. They take on Burlington and resurgent MHL Cup Tournament champion No. 16 Catholic Memorial this week.

No. 7 St. John’s Prep has played stout defense, evidenced by the fact they yielded just four goals in Frates Classic games against this poll’s top two teams. The Eagles get down to Catholic Conference business this week against MC and No. 17 Xaverian.

No. 8 Arlington picked up one-goal wins against Andover in the Ed Burns Classic semifinal and against Woburn in Middlesex League Liberty Division play. The Spy Ponders face Belmont and No. 18 Reading in ML Liberty play this week.

No. 9 Andover of the Merrimack Valley/Dual County One bracketed its loss to Arlington with wins against Reading and Waltham. A league game against Billerica on Wednesday precedes Saturday’s visit to St. Mary’s.

No. 10 Arlington Catholic is in the midst of a two-week schedule gap – the Cougars lost to Austin Prep last Wednesday and will not play again until Wednesday, Jan. 11 against Archbishop Williams.