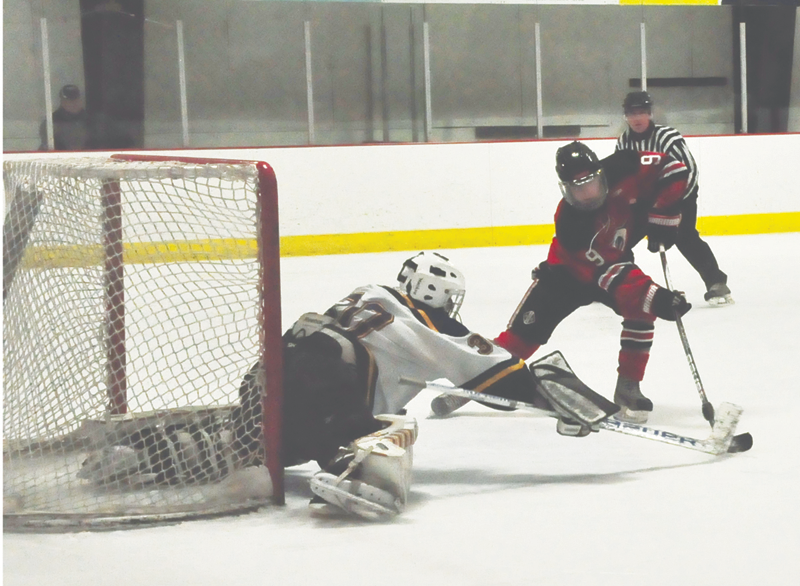 Freshman Matt Thomson’s power play goal at 6:31 of the third period broke a 1-1 tie and sent the Middlesex League Liberty champion Rockets into the quarterfinals. Jake Barbera had a power play goal in the game’s first minute and freshman Kevin Tobin sealed it with an empty-netter in the final minute. Ryan Smith notched the Cougars’ goal in the first period. AC finished 13-7-1.

Junior goalie James Offner was the difference for the Sachems with 31 saves. Brendan Greene scored twice, including the game-winner in the early stages of the third period. Nolan Redler added two assists. Seniors Tim Brennan and Travis Wile scored for the Clippers, who made history by becoming the first Cape Ann League team to play in the D-1 Tournament. Newburyport finished 12-8-2. 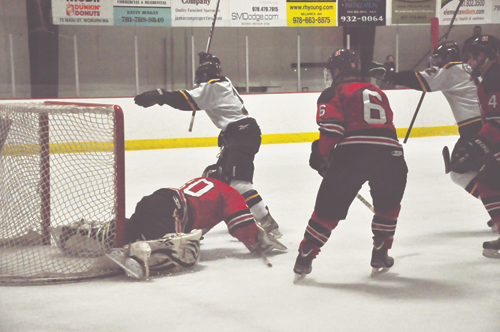 ARLINGTON CATHOLIC’s Ryan Smith celebrates first period goal. It would be AC’s only goal of the night, though as Reading won this one, 3-1

The Pioneers ended the Red Devils’ two-year reign as State Champion on the strength of a three-goal third period and Mario Pizzeri’s 31-save performance. Chris Stalmok scored the game-winner at 52 seconds of the second period, then added a power play strike at 7:38 of the third. He also assisted on goals by Patrick Storer and Chris Adams to complete a four-point night.  Burlington finished  10-4-8.

The two-time defending D-2 State Champion Wildcats made a positive D-1 post-season debut. Senior center Cody McGowan (2 goals, assist) led the way, and scored the game-winner at 7:00 of the third period. Luke Foley added a goal and an assist. Trailing, 2-0, Matignon pulled even on a pair of Mike McPherson goals within the first five minutes of the third period. The Warriors finished the season at 10-10-1.

The Mustangs scored the game’s final three goals to secure the win. A-B got second-period goals from seniors Hunter Arnold and Ben Barton for a 2-1 lead.  Paul Zizzo, Sean Allen, Luke Melendez and Ross Watson had goals for Medford. A-B finished the year at 10-7-4. 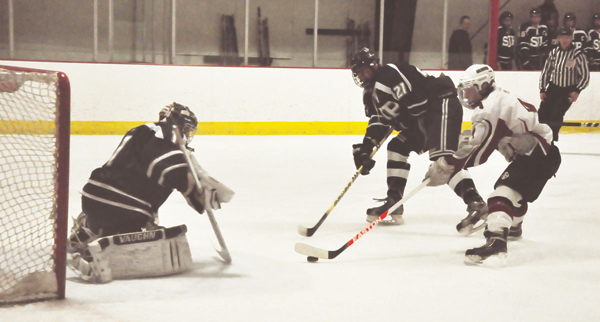 St. John’s Prep, a perennial D-1A participant from the State’s premier power league, began post-season as a Sectional favorite and exited shaking their collective heads after the combined 40-save shutout of the goalie tandem of Ryan Cote and Mike Schiller, who split time every game. Schiller was immense with 28 saves, 20 in the third period. Matt Shea had the lone goal with 13:43 to play. SJP finished at 9-10-2.

Melrose vs. Reading, at Woburn, 1

Wilmington vs. Medford, at Chelmsford, 5:40