Longmeadow (3-3-1) finally returns to the ice on Friday when they take on No. 2 Westfield (2-4-3).  The Bombers strong strength of schedule keeps them in the second spot this week.

West Springfield (5-3-0) split a pair of games this week after they beat East Longmeadow and fell to Grafton.

Minnechaug (4-4-0) jumps up a spot this week after posting wins over Wahconah and Agawam this past week.

Wahconah (4-1-1) suffered their first loss of the season when they fell to Minnechaug, but responded nicely two days later with a 6-2 win over Mt. Everett.

Amherst-Pelham (7-1-0) beat Chicopee Comp., 5-1 to continue its winning ways.  The Hurricanes have outscored their opponents 31-10 to date.

Thanks to Trevor Seidell-Poirier’s hat trick, Chicopee (5-1) moves up a spot after a 3-0 win over Belchertown.  That was the first loss of the season for the Orioles (3-1-1).

Greenfield (4-1) has now won four in a row, thanks in large part to the strong play of Bryan Baumann. 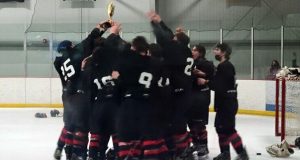