After losing to Tewksbury in the Division 2 North quarterfinal a year ago in double overtime and again in the their first meeting this season, Saturday was an important day for Lincoln-Sudbury.

Not only did the Warriors have a chance to clinch the DCL/MVC 2 league title, but more importantly repair some of the mental scar tissue against the Redmen before the final playoff push commences this week.

Lincoln-Sudbury answered the bell in what was a physical, chippy game (13 total penalties), earning a 5-1 victory. 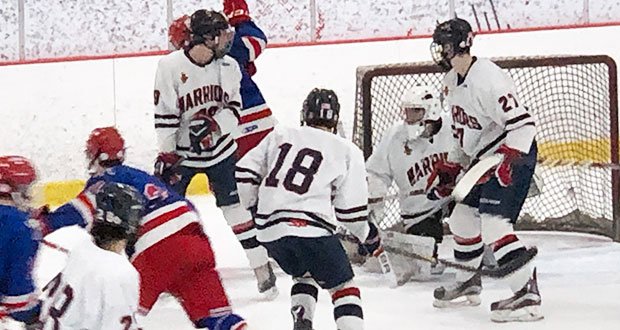 Lincoln-Sudbury goalie Jack Hankey covers up puck with heavy action to the side of the net in Warriors. 5-1 win over Tewksbury.

“We needed to win one of our last two (for the league title) so it’s nice to get that behind us,” said L-S coach Matt Carlin. “A lot of emotions playing such a great hockey team, they’re always hard to play against. They’re going to play hard the full 45 minutes and they kept coming at us and we didn’t let up.”

Tewskbury controlled the majority of possession in the first period, but it was Lincoln-Sudbury who took a 2-0 lead to the dressing room thanks to a short handed snipe from junior Jacob Noyes and a rocket from senior Angelo Venuto.

After the Warriors were called for charging four minutes in, Noyes found himself streaking over center ice trying to chase down a puck that was chipped out by senior Tim Duffy. Noyes won the race, collected the puck inside the Redmen blue line, skated in on the right wing and let an absolute rocket go short-side high over the glove of Tewskbury goalie Ben O’Keefe to make it 1-0.

With just 1:21 left in the first Venuto had a great individual effort on the forecheck, poking the puck loose off a defenders stick at the blue line. Venuto collected it and calmly let one go high glove side for the 2-0 lead after one.

“My whole line kind of got that goal,” Venuto said. “I had (Jack Lanzillo) pressuring, and (Brendan Quinn) pressuring them, I kind of got that poke in there then I went down and shot it. Goalie probably should’ve had it, it was glove side high but I’ll take them.”

The second period was littered with penalties (5 combined) as both teams began throwing their weight around and the Warriors took advantage, scoring on a 5-on-3 to make it 3-0 after two.

With 9:29 left and the Warriors on the two-man advantage, senior Colby Jones calmly controlled the puck at the left point, then found classmate Duffy back door. Duffy collected the puck, shifted to his backhand and shoveled it home for the three-goal lead.

“If we don’t get motivated after playing the way we did tonight, we’ve got issues,” Tewskbury head coach Derek Doherty said when asked what he takes most from the lopsided loss. “Obviously Lincoln-Sudbury’s a good hockey team, but I didn’t think we played even close to our capabilities.”

Tewksbury had its share of power plays as well on Saturday (1-for-6), but L-S senior goalie Jack Hankey (14 saves) made some big saves when needed as his team allowed him to see the puck most of the day.

“I’ve got a lot of confidence in my defense,” Hankey said. “They did a phenomenal job clearing out pucks and blocking shots for me, I love those guys.”

The physicality continued in the third, but L-S held its ground until an empty net goal from senior Johnny Oblak with 1:59 remaining made it 4-0. Tewskbury did get one late power play goal from Asa DeRoche with 1:23 left, but one final empty netter from Venuto sealed the deal at 5-1.