Before moving to Division 1, the Shrewsbury hockey program ruled the Division 3 Central scene with an iron fist. While the Colonials were winning the D3 state title in 2017 and 2018, the Marlboro program was trying to build what Shrewsbury had, struggling to find any kind of consistency.

Fast forward three years to Saturday night. This time, it was the Panthers looking to make a statement that they are now the class of CMASS when the teams met for a huge matchup at NorthStar Ice Sports. Marlboro entered the game unbeaten, just three years removed from being a sub .500 team. The Panthers also beat Shrewsbury back on January 13 and were looking to sweep a regular season series against the Colonials for the first time in (at least) 16 years. 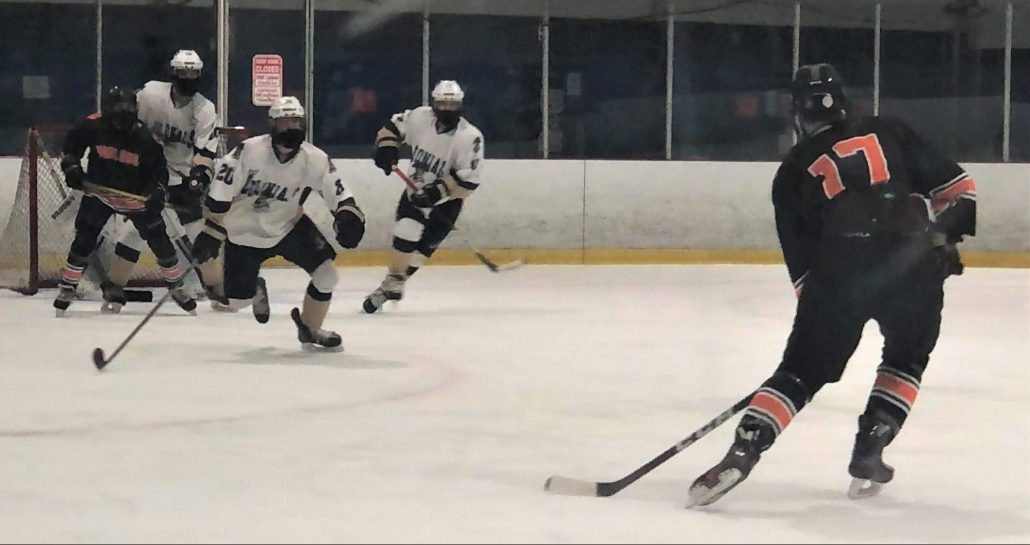 Shrewsbury’s Will Ambach moves out on Marlboro’s Dylan Hunt Saturday in the Colonials’ 5-2 victory.

Meanwhile, Shrewsbury entered not only looking to avenge the loss, but looking to remind their rivals just how good they still are. After all, the Colonials did reach the 2020 Division 1 North quarterfinals in just their second year as a D1 program.

Ultimately, a three-goal second half (the teams played two 22 1/2 minute periods) allowed the Colonials to come out on top with a 5-2 win in this one.

Shrewsbury is now 6-2 overall while Marlboro’s first loss leaves them at 5-1-1.

“We had been shut down for three weeks and then practiced the day before (the first meeting) and that was it,” said Shrewsbury head coach Terry Virtue. “We really only had one practice prior to that as well, so I think the guys just wanted to come out tonight and try to show them it wasn’t the same team they saw the first time.

“I actually thought Marlboro carried a lot of the play, we were just able to take advantage of some power plays and put a few in there in the later stages of the game, but that’s a talented team over there.”

After a pretty quiet first period in terms of physicality, things ratcheted up several notches in the second, but Shrewsbury was able to keep its composure a bit more than the Panthers did.

The Panthers were called for four different penalties in the frame and Shrewsbury made it hurt.

With 12:03 left in the game and the Colonials on a 5-on-3 power play leading 2-1, Jamison Alicandro scored his second goal of the game, letting a wrist shot go from the point that had eyes through traffic.

Marlboro responded moments later when Ben Hamann finished a quick 1-timer on the doorstep after a great feed from behind the net by Collin Tunnera, making it 3-2 with 10:29 to go.

Shrewsbury just had too much offense in the final few minutes though, as Nicos Evangelous (PPG) and Connor Umile both potted goals in the final three minutes for the 5-2 final.

Prior to the scoring outburst, it was senior goalie Ryan Sande (19 saves) who put on a show and kept the Colonials in front, stopping two different 2-on-1 opportunities in the early stages of the second, including one ridiculous blocker save, pushing all the way across the crease and stoning a potential game-tying goal at the time.

I saw a kid open in the slot and at first I was like “oh, no,” Sande said of his blocker robbery. “Just tried to get in position, cover the middle of the net and I ended up lucking out and making the save.”

“He’s huge, he’s a big leader of ours,” he said. “He stepped up big for us tonight, but that’s just kind of what he does.”

Shrewsbury freshman John Doucette scored his first varsity goal early in the first period to open the scoring less than five minutes in. With 7:40 to go in the period Alicandro collected a puck in his own zone, streaked over center ice and let an absolute laser go one stride into the Marlboro zone. The puck whistled into the top left corner, beating Panthers’ goalie Billy McCarthy for a 2-0 lead.

Just 20 seconds later Anthony Giansanti took advantage of a turnover in the slot and roofed a puck into the top left corner over Sande to cut it to 2-1. Late in the frame, McCarthy (22 saves) denied a breakaway to keep it a one-goal game heading to the second.

“I think this kind of game was actually good for us,” said Marlboro coach Mike O’Brien. “There’s been a lot of teams in Central Mass looking up at Shrewsbury for quite some time now, and whether they moved up to Division 1 or not, they’re always going to be a good measuring stick for us.

“We lost our composure late and they took advantage. We did some good things and it’s a good learning lesson for guys coming back next year. I was excited to see they were going to be in our pod this year, I’m not sure how many of our guys were, but you always want to see how you match up against some of the best teams and they’re still a terrific team.”