In a season unlike any other, truncated as it has been by the COVID-19 pandemic, where does the motivation to excel come from?

The answer is pretty clear to veteran Archbishop Williams hockey coach Derrackk Curtis, whose 9-0-3 squad has been sizzling from the outset of his 13th season on the Bishops’ bench. 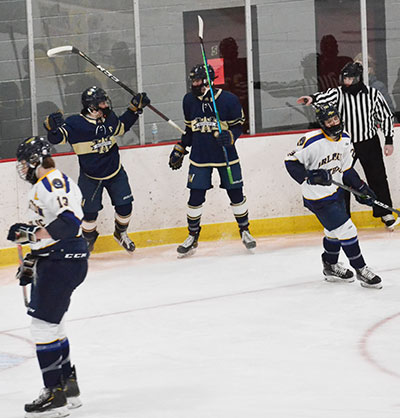 The Bishop celebrate a goal during a recent win over Arlington Catholic. They stand at 9-0-3 overall heading into this weekend’s action.

“Our focus has been to make the most of the opportunity to play. We can’t dwell on what we can’t do; only what we can. You only have so many opportunities to play the game and you need to make the most of every day,” Curtis said. “We just wanted to play the right way every time we step on the ice and make sure we play hard regardless if we have hardware on the line.”

Ah, the coveted hardware. There are no MIAA tournaments this winter and no Catholic Central Large champion, per se. According to Austin Prep AD Pat Driscoll, standings will be used to determine seeding in the league’s own post-season event.

The inevitable negative thoughts – or “weeds” as Curtis calls them – about what could have been are cut down to size.

“You don’t even want to let those weeds in. You think like that and you’re no good to anyone. [Not having] a state tourney is not our call. We have no voice and what I say about it does not matter,” he stressed. “The bottom line for the coaches and the boys is go out and make a difference. Play for each other and build a season. Tourney or no tourney, play the right way and feel good about what you have done.”

Curtis had a pretty good idea this season could be special after last year’s club tore through the South Sectional, knocking off Bridgewater-Raynham, Wellesley and Franklin before falling to Walpole, 1-0, in the title game. Only five seniors graduated from that club that surged to an 11-9-3 overall record

This season the Bishops have taken 3-of-4 points from league power Austin Prep and skated away with an all-around sound 4-1 road win against St. Mary’s on Wednesday night. The Bishops have swept Arlington Catholic and are 4-0-2 in non-league games, outscoring opponents, 44-17.

“They are all competitive and regardless of not having the chance to play for a championship their final year they committed to giving the team their best.  All of these kids can make a difference at any time in any game. They’re all good kids and we will miss them. They all bring something to the group and it takes all types to grind out a season,” Curtis said.

Among underclassmen, the play of freshman goalie Brendan Carberry has been stellar, junior forward Jackson Sylvester has emerged as a steady contributor, and sophomores Mathew Keenan and Tom O’Connell and freshman Mathew Deminico have earned increased playing time.

“We knew what we had going in this year. The young guys have all played key roles and matured for us. One shift or five shifts they all bring something to the team,” Curtis said.

In normal times, this would have been Williams’ third straight tournament appearance, the program’s best stretch in several seasons.

“I think we just want to make the most of a difficult situation. Get out, put the blades on, hang with the boys and work for the group. This group believed it could excel from the start after the run they made last season,” concluded Curtis, who has guided the Bishops to the 2010 State title game as well as a 2014 Division 1A play-in berth. 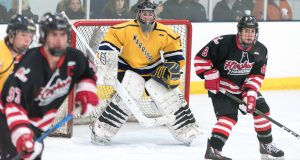