Mass. Boys HS Hockey: In Woburn, Unbeaten Tanners Turn It Around In A Big Way

Under normal circumstances, the Woburn High boys hockey team would be gearing up for a second consecutive post-season appearance. However, erring on the side of caution regarding the ongoing pandemic, the Massachusetts Interscholastic Athletic Association canceled state-wide tournaments this winter.

This would’ve been the first time since the 2012 and 2013 seasons the Tanners made back-to-back tournament appearances. The unbeaten Middlesex League Liberty Division leaders (6-0-1), ranked fourth in the current HNIB Division 1 Top 20 , have dominated while outscoring its opponents, 34-8.

Woburn gained the inside track to the league championship when it shut down previously unbeaten Belmont, 3-0, on Wednesday, Feb. 3 on the Marauders’ home ice. The rivals square off again this Wednesday (O’Brien Rink). Additionally, they have swept Arlington and taken 3-of-4 points from Reading. 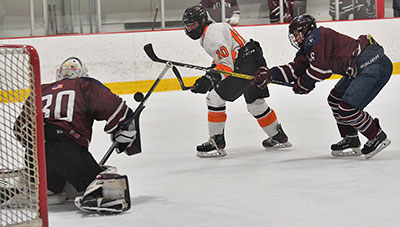 Coach Jim Duran, in his 23rd season, had a sense this could be a special season for the Tanners.

“We were just looking to be competitive. We thought we would have a good team but we had to put it together and work hard at both ends of the ice every night,” Duran said. “We just have a solid team up and down the lineup with lots of good role players.”

Prior to this two-year run, Woburn’s tournament history had been spotty over the past decade or so.

The 2007 team earned a Division 1A play-in berth – one of the program’s two 1A appearances (1992) – losing to Austin Prep, 1-0. Undeterred, the Tanners returned to the D1 North Sectional, defeating Waltham, 4-2, in the title game before falling to Duxbury, 3-2, in the State Championship game. Woburn then qualified each of the next three years but only four times in the past 10. Their last tournament win came in 2012.

What has sparked this year’s turnaround? Duran points directly to his seniors, several of them three- and four-year varsity veterans. 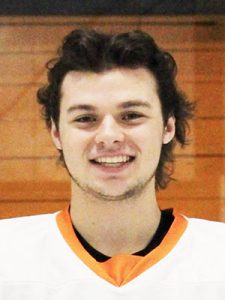 “I think the major factor for our success this year has been the experience and the leadership of our seniors. I thought we had a pretty good team last year but we just had too many young players,” he said.

Among the seniors, Captain Jonathan Surrette is the unquestioned offensive leader and joined the program’s 100-point club last week.

“Johnny skates well and can really shoot it. He’s been one of our best players for four years now,” said Duran.

Surrette joins some pretty select company in that 100-point club, the most notable member being 1982 graduate John Carter (93-48-141). He starred at RPI under coach Mike Addesa, earning All-American honors and helping the Engineers win the 1985 NCAA National Championship. He played for Team USA (1986) and parts of 10 NHL seasons, including seven with the Bruins.

Senior captain Lance Anderson has also enjoyed a strong season and Duran describes him as “a great leader who skates hard and plays well.” 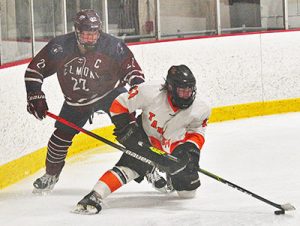 Junior defenseman Mike Arsenault has been a key on the blue line for the Tanners this year. (Photo by Joe Brown)

Duran is pragmatic when discussing the post-season.

“Are we frustrated there’s not a tournament? You’d have to say ‘Yes’ but we’re just happy to play because I think there was a point in time this year that we didn’t think we’d even have a season. These kids have put so much time in during the off-season working out and doing skills,” he concluded