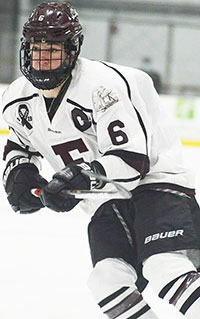 The teams split regular-season games: Falmouth won, 3-2, on Jan. 27 and Barnstable prevailed, 2-0, on Feb. 15. Each advanced directly to the Atlantic Division title game when Sandwich and Nauset withdrew due to COVID protocols. Devlin’s hat trick goal, with 3:35 remaining in the game, was also his 100th career point.

The Clippers seized control of the game with two goals in a 17-second span in the final minute of the first period with Harry Hennessey assisting on both. First he set up Devlin for what stood as the GWG with 52 seconds left in the period. Then he found Kyle Souza for a long-range strike from just inside the blue line.

Devlin made it 3-0 at 12:23 of the second period. He completed his hat trick in the third period, shoveling home a loose puck from a goalmouth scramble.