Rarely do you get a chance to play a team three times in a two-week span, but that’s exactly the scenario the St. Mary’s and Austin Prep boys squads are currently facing.

After skating to a three-all tie on January 13, the teams met again at the Breakaway Ice Center on Saturday afternoon with the Cougars winning 3-0 in dominant fashion.

Austin Prep (5-1-2) and the Spartans (5-2-1) will also meet again at Connery Rink on January 27 to complete the 2021 trilogy. It’s a strange schedule quirk in a year full of them, but AP head coach Bill Pappas is more than happy to have that problem rather than having no hockey at all. 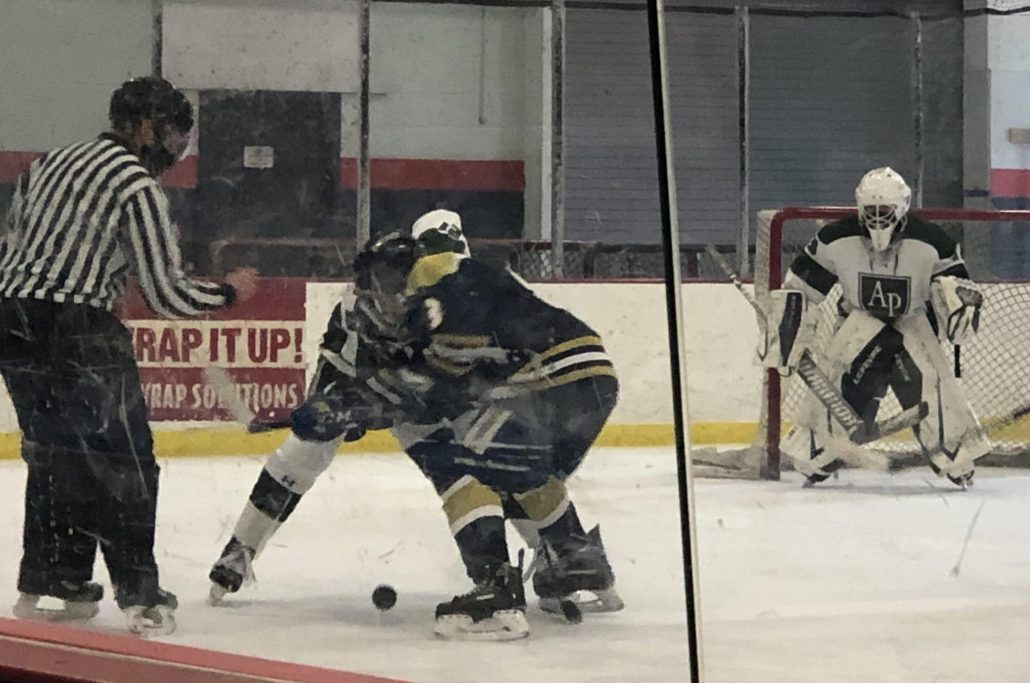 Austin Prep goalie NathanDeroche, getting ready as puck is dropped to his right, needed to make only five saves in the Cougars’ 3-0 shutout win over Catholic Central League rival St. Mary’s.

“In a regular 21-game season we always talk about how important every game is to get to where we all want to be,” said Pappas. “So, (in a shortened season) to have limited access and games changing on the fly every week and trying to fill spots, we tell them every day we’ve been very lucky. You know what? Take it and run with it because we could be shut down tomorrow and a lot of teams have been. Take every shift, embrace it, and have a good time with it.”

Austin Prep had a great time with seemingly every shift on Saturday afternoon, outshooting the Spartans 27-5 including 9-1 in the first period.

St. Mary’s junior goalie Sam York (24 saves) was great in the first period until just 1:49 was left on the clock. Sophomore Joe Thibodeau got the Cougars on the board first, finishing a rebound on an odd-man rush with assists going to junior John Toohey and freshman Noah Pineo.

With just 32.9 seconds left AP made it 2-0 when freshman Ty Wood somehow laced a pass through three defenders from inside his own zone and sent eighth grader Jacob Duval in on a breakaway. Duval made a move then finished on the backhand for the two-goal lead.

The Spartans were much better in the second period but couldn’t beat Austin Prep’s sophomore netminder Nathan Deroche (5 saves) on a couple chances and the teams went to the third period with AP still up by two.

Just 3:29 into the third it was the other Thibodeau brother’s turn to score for the Cougars as senior Joe Thibodeau potted a goal off another odd man rush with assists going to classmate Doug Russo and junior Aidan Elkins.

Things got chippy for the reminder of the frame as five total penalties were called in the last nine minutes.

For the Thibodeau brothers, games like Saturday are ones that will provide the two siblings and teammates with memories for a lifetime.

“It’s huge,” Joe Thibodeau said of getting to play with his brother in such a strange year. “My senior year, my last year at this school playing with him, we’ve had a good year so far and we’re looking forward to keep winning some games.”

“This season’s huge,” added Drew Thibodeau. “You can’t take any game for granted, just play hockey and do your thing.”

Both the Cougars and Spartans know they’ll have to quickly turn the page and get ready for the third and final meeting this season in just a few days.

“We always play someone and then you don’t see them for a few weeks, right?” Pappas said. “We’re excited, the team is excited, we love playing St. Mary’s. It’s a very competitive game. Mark (Lee) has a great team and they’re always ready for the compete level. We’re going there, hostile environment. We’ve been there before, we’’ll be there again and we’ll see what pans out.

“It’ll be a good game, trust me, we’re looking forward to it.”