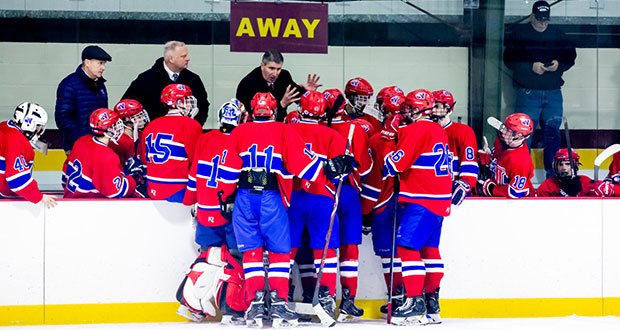 When Natick skated to a 1-0 victory against Bay State Conference Carey Division leader Framingham in front of a raucous home crowd at Chase Arena on Saturday, Feb. 8, new Redhawks’ coach Bill LaCouture Jr. knew all he needed to know about his club.

“The game was in front of a packed arena. What it tells me about this team at this point is that our team can compete against anyone on any given night. Our players will rise to the occasion,” he said after the Redhawks handed Framingham its first league loss to split the season series.

The Redhawks have certainly done just that, compiling a 13-2-4 overall record as the regular season swings into the final week and stamping themselves as a team that bears watching in the post-season.

If the LaCouture name sounds familiar, it should. Bill LaCouture Sr. – himself a former Natick player and 1962 NHS graduate – coached the Redmen, as they were once known, from 1975-76 through 1995-96. 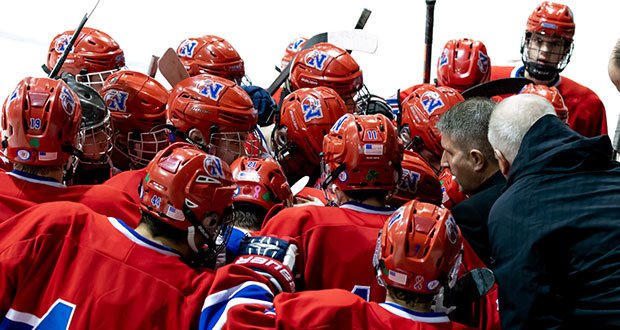 Bill Jr. (UNH, Chicago Blackhawks) and his younger brothers Dave (UMaine, St. Louis Blues) and Dan (Boston University, New York Islanders) all played D1 college hockey and were NHL Draft picks. Bill’s professional career was curtailed by an injury; Dave won a National Championship at UMaine; and Dan played for six NHL teams from 1998-2004 and 2005-07, including a season with the Bruins.

Bill Jr. is exactly where he wants to be. He spent a single season as head coach at Amesbury High (1999-2000) 20 years ago before being transferred to Chicago for business. He coached his children’s teams but any aspirations beyond that were placed on the back burner until they were grown. However, upon returning home, he served an assistant at Catholic Memorial last season before taking the only job he ever truly desired at his alma mater.

“It is a great honor to be able to coach where all three of the LaCouture brothers have played and played for my father. The great hockey tradition that my father created has brought back so many former players to be part of the culture that I am bringing back. There has been a resurgence of spirit, excitement and tradition based on the large crowds at the games. The Framingham game is one example,” he said.

That sense of tradition is evident in the coaching staff LaCouture has assembled. His father helped out during pre-season, still lends a hand at practice and is in the stands with brother Dave at every game.

Eight of the assistants helping with the varsity and two sub-varsity teams are Natick High graduates. LaCouture played with Pat Haswell (NHS, ’84), Tim Kelley, (NHS, ’84) and Chris Heaney (NHS, ’85) and Ron McGill (NHS, ’90) on teams coached by his dad. His brother Dan (NHS, ’96) and Ron Chin (NHS, 97) also played for the elder LaCouture while Matt Schneider (NHS, ‘12) and Ryan Schneider (NHS, ’15) are representative of the current generation of players.

In his pre-season preview for HNIB LaCouture said he expected the Redhawks to be competitive despite returning only seven players with varsity experience. That said, he believes this team has arrived ahead of schedule.

“The players were hungry to compete and to learn the systems to play at a high level,” he said. “We play as a unit, the players have a tremendous positive attitude and work ethic and they have bought into my systems and the culture we have installed.

“Playing and coaching at a high level has allowed me to translate those experiences to our team and how we go about our systems, how we prepare and how we go through our processes to compete at a high level,” said LaCouture, who while living in Denver had the opportunity to work with former University of Denver coach George Gwozdecky.

Despite their youth – 11 juniors and eight sophomores are on the varsity roster – the Redhawks have demonstrated great resilience and mental toughness with nine one-goal wins. And while they don’t score much (53 goals in 19 games) they rank among the division’s premier defensive teams with just 28 goals allowed.

“It is very difficult to single out a few players because the team has played as one unit. Everyone on the team has a major impact on our success,” LaCouture concludes.

The Redhawks wrap up the regular season with a home game against Lincoln-Sudbury (Feb. 19, 7:40 pm).