“Anytime you’re playing a Catholic Conference team and get a win, it’s a big win,” BC High head coach John Flaherty said. “They’re a very good team. Even before this game I would argue they were a top team in the state. So, for us to have them on our home rink and take the 4-2 win, it’s a good moving on point for us.” 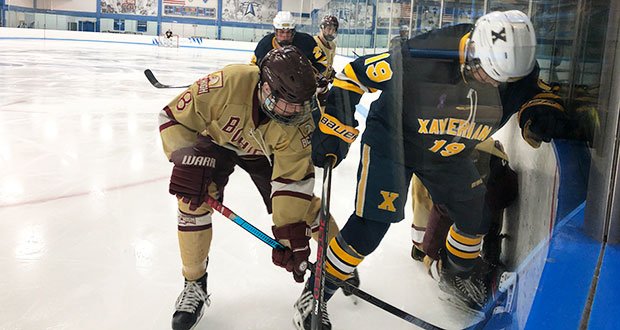 The Eagles wasted little time getting on the board in this one as senior Matt Keohane took a pass from classmate Michael Dragon behind the net, quickly came around and tried to fire it through the crease, but it ricocheted off a defender’s skate and over Hawks goalie Kyle Harvey (16 saves) for the 1-0 lead just 2:44 in.

With the teams skating 4-on-4 Xaverian tied things up at 1-1 when senior Ty Marchi took a puck from sophomore Nolan Dion during a breakout in his own zone and started a two-on-two rush with senior Stefano Lanci.

Dion left a drop pass for Lanci who let a wrister go that was originally blockered away by Kiesewetter, but Marchi followed the puck behind the net, quickly backhanded it in front and Lanci was able to jam it home to tie the game.

Just 22 seconds into the second period the Eagles went back up 2-1 when the Hawks were unable to clear a loose puck in the slot and Norton collected it, turned and let a rocket go into the top right corner. BC High would carry that same 2-1 lead into the dressing room for the third.

“It feels really good, we needed this,” Norton said. “We lost to them earlier this year and felt like we could’ve beaten them, so it was nice to get this one.”

The Eagles made it 3-1 with 9:07 left in the game as senior Aidan Carey again took advantage of Xaverian’s inability to clear the puck, keeping it in at the blue line and then sneaking a low shot past Harvey for the two-goal lead.

The Hawks battled back, cutting it to 3-2 with 4:28 to go on an absolute laser in the slot from senior Matt Ryan with the Hawks on the power play.

BC High was called for a too-many-men on the ice call with 1:45 left. Harvey was pulled, but an empty net goal from Norton after a phenomenal back check with 41 seconds to go sealed the deal for the Eagles.

“We’ve been playing well the last few games, and this is just another step forward for us,” added Flaherty.