Prior to the start of the MIAA Boys Division 2 North sectional tournament, if you had predicted it would be an all MVC/Dual County II final, many observers may have agreed with you.

As it stands, it will be an all MVC/Dual County II D2 North final, but it won’t be top-seed Tewksbury and Lincoln-Sudbury battling for the right to get to the state final at Boston Garden. Instead it will upstarts Haverhill (the 11th seed) and Concord-Carlisle (the 9th seed) battling for the North title.

Haverhill continued its impressive march through the North sectional on Wednesday night, downing second-seeded North Reading, 2-1. In the first game of the doubleheader at the Chelmsford Forum, Concord-Carlisle, under the tutelage of first-year coach Curt Colarullo, took care of Masconomet, 5-1, in a game that the Chieftains controlled territorially for most of the first two periods.

“It’s been a wild ride so far,” said Haverhill coach Joe Roberts. “We have beaten the sixth seed, third seed and now the second seed. It is just unbelievable. The kids just don’t quit. They think they are capable of beating anybody.” 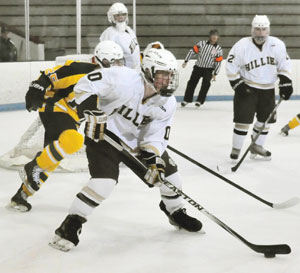 The Hillies trailed after the first period, 1-0, but made a pair of second period power play goals stand up, thanks to some outstanding goaltending from Mike Gleason, who was constantly under siege.

“Mike has been playing fantastic,” Roberts said. “He is in a zone.”

The only goal to beat Gleason came at the 8:56 mark of the first period and was of the fluky variety. A dump-in by the Hornets took an odd bounce off the back boards and over the stick of a Hillies player who went to corral it at the left post. The puck slid right to Pat Driscoll, who fired short side past Gleason.

Haverhill had a power play to start the second period and cashed in late in the man-advantage. Freshman defenseman Cam Berube made a nifty end-to-end rush, eluding the North Reading defensemen. Hornets goalie Nick Ponte stopped his bid, but in the ensuing scramble, seniors Josh Goldstein banged home the loose puck in the crease. Kyle Gosselin also assisted on the goal.

Later in the frame, the Hillies were awarded a four-minute power play when a North Reading player was given a boarding major. At 11:24, Gosselin found the puck on his stick at the doorstep and he slid it past Ponte. Haverhill had the lead at 2-1.

“For us to be successful, we have to get pucks to the net and create some traffic in front,” Roberts said. “Both of our goals came on rebounds.”

The third period was an un-and-down affair, but the Hornets (who finish 18-5-0), couldn’t get the puck past Gleason. They pulled Ponte with 55 seconds to play and had a handful of chances, but the puck would not go in.

Haverhill will meet league foe Concord-Carlisle in the D2 North Final on Monday, March 9th at Tsongas Arena in Lowell. 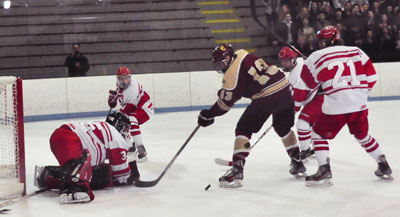 Concord-Carlisle was hanging on against fifth-seeded Masconomet for the better part of two periods in the earlier game. C-C’s Rob Campbell and Masco’s Anthony Mancini traded goals in the first period.

The game turned late in the second period when the Patriots banged home a pair of goals in 86 seconds to take a 3-1 lead.

Tommy Standish made it a 2-1 game when his short wrist shot found twine at 12:05. Then, at 13:31, a seemingly innocent wrist shot from the top of the slot by freshman defenseman Henry Nelson went in for a 3-1 cushion.

The two goals seemed to ignite the Patriots, who had a lot of offensive zone play in the third period. Captain John Carroll scored a pair of goals, the first on a nice rush down the left wing off a set-up from defenseman Jon Severns at 6:25, and the second when he banged home a nifty centering feed from Jeff Costanza at 11:30.