In a contest overflowing with adrenaline from both sides, a pair of goals from senior Makem Demers helped lift host #2 Pope Francis to a 4-0 victory over #3 Austin Prep.  With the win, the Cardinals, winners of five straight, improve to 7-1-1. The Cougars picked up their first loss of the season as they drop to 9-1-1.

“We were really excited to play this game,” said Demers, who also added an assist. “We knew Austin Prep was good but as a team, we knew we needed play bigger and play faster then them. We were able to do that tonight. I thought we did a really nice job beating them to a lot of loose pucks and taking away some of their momentum.” 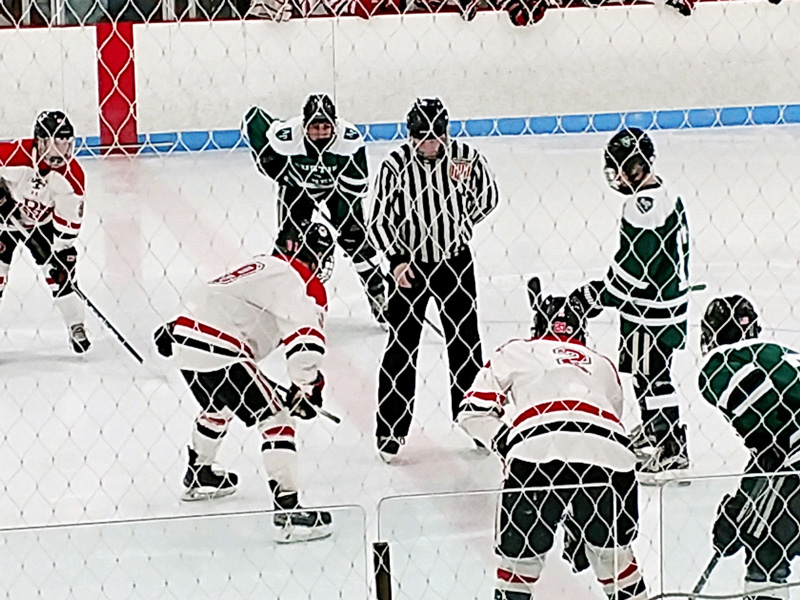 HNIB’s #2 and #3 ranked teams in Division 1 squared off Saturday at the Olympia and #2 Pope
Francis took a solid 4-0 win.

The Cardinals appeared to be one step ahead of the Cougars throughout. Just 2:08 into the game, sophomore forward Matt Burke knocked in a rebound off a hard shot from Zach Reiser. It was Burke’s first goal of the season. That was the only scoring of the opening frame despite Pope Francis putting up 10 shots on Austin Prep’s outstanding senior goaltender Rob Farrell ( 21 saves).

Over the course of the final minutes of the first period and into the second, the Cougars seemed rectify their defense by starting to get a bit more aggressive and work their way into the Cardinals grill by deny them much space. For a while, that strategy was working and it, in turn, began to open up some things offensive. However, Austin Prep’s frustrations continued to mount as nothing it attempted was getting past senior netminder Victor Larssen (20 saves).

At 12:37 of the middle period, Pope Francis caught Austin Prep napping and took full advantage. A nice stretch pass by Demers hit Max Cocchi in stride at the opposite blue line. The senior forward darted past the defense and then beat Farrell with a backhand to make it 2-0.

“Max has been scoring for us all season,” Cardinals coach Brian Foley said. “He has been a great player for four years here. Overall this was a tough game I felt. We had some success tonight clearing pucks from around our own net. In the past, those pucks would wind up in the back of our net. As a team we are coming along but still have a ways to go.”

The defending Super 8 finalists realized a two-goal lead after 30 minutes was anything but secure. Especially against a top-level opponent. As expected, Austin Prep treated the third period like it was on its last breath, throwing everything it could into the offensive zone with the hope of solving the Larssen puzzle.

Trying to bait the Cardinals in committing a mistake, it never occurred. Pope Francis continued to play smart and were reminded constantly from the bench to not get careless and shoot itself in the foot.

Instead, the offense went back on the attack. Demers tallied his two goals, coming at 10:48 and 13:25, respectively to put this one to rest.

“That was the better team by far tonight,” Cougars coach Bill Pappas said. “They are strong and physical. We didn’t live up to how we can play. They had a nice break out and unfortunately for us, we had some defensive lapses in the neutral zone. You can’t do that against a team like that and get away with it.”