Maine Class B Championship: In repeat performance, Waterville pulls away from York, 7-4

For the second straight season, the Waterville Purple Panthers are the Class B State Champions. On Saturday afternoon they defeated the York Panthers, 7-4, at the Androscoggin Bank Colisee.

Jackson Aldrich and Justin Wentworth each had a hat trick to pace the Purple Panthers (20-1). Jake Martin had a goal and three assists to lead the Wildcats (17-3-1).

“We knew we were going to come out and our one goal throughout the entire year was to win the championship,” Aldrich said. “Whatever way it took, that’s what we are going to do.”

Waterville got on the board first as Aldrich found the back of the net 6:24 into the first period as Matt Jolicoeur fed him in the slot. The puck ricocheted off the bottom off the post.

Jake Martin responded 17 seconds later when he went all alone on Waterville’s Nathan Pinnette after receiving a pass from Jake Martin right before he entered the offensive zone. He made no doubt it.

The game remained 1-1 after 15 minutes after some great goaltending from Keenan Gamache.

Waterville came out with a purpose to start the middle frame. Michael Bolduc and Justin Wentworth each had a goal and assist as the Purple Panthers went up 3-1 33 seconds into the stanza. Aldrich also had an assist on both goals. 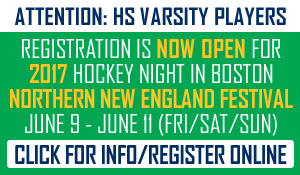 “We knew if we dumped it in and got to the puck first to feed it up out front,” Wentworth said of the game plan going into the second period. “That’s what happened and that’s what helped us out.”

Wentworth potted his second straight goal as he stretched the lead to 4-1 with under three minutes to play in the period.

York responded quickly when Martin Lundgren found Spence Pickett to pull within a pair. The goal came 23 seconds after Wentworth’s at the 12:47 mark. Martin Found Andrew Bertolini with 34 seconds left to play in the period to get York within one.

“They didn’t panic, they kept grinding, and we got another one,” York coach Jim Powers said. “Next thing you know we are clawing our way back. We were trying to cut the ice in half a little bit, play more from side-to-side to get on pucks quicker. They really work hard, they have a couple good defensemen.”

Martin tied the game at four at the 8:12 mark of the final stanza as he was standing below the goal line and he found a small opening below the far post.

“We knew that it was a good hockey team over there,” Waterville coach Dennis Martin said. “That last goal was a hell of a shot, the tying goal was wow right under the cross bar. We probably hit six cross bars at one point in the game. They were resilient, you know they weren’t going to fold. We knew that we knew if we kept working hard it would sooner than later.”

It was the Aldrich and Wentworth show from then on. Aldrich picked up the eventual game-winner after Wentworth hit the post with 3:34 remaining in the contest. Wentworth capped his hat trick with 1:23 remaining in the game with a nice deke. Aldrich capped the scoring with 0.3 seconds left.

“They seemed like they were in the mood today,” Martin said. “They came back to the bench and they said coach: ‘We have plenty of gas left in us.’ Jackson and Justin they kept coming and saying I am ready every 50 seconds, I am ready to go. It was their last game they could play, they brought everything to the table. That’s what they’ve always done.”