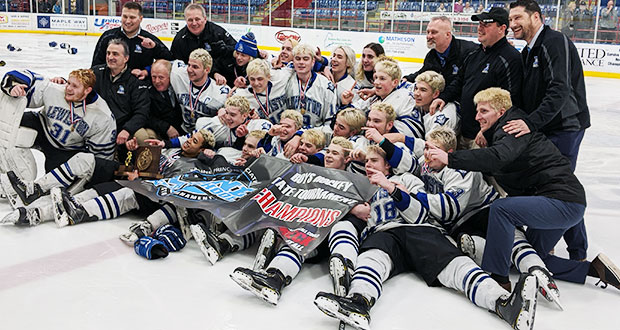 Lewsiton put the caps on a perfect 21-0-0 season with a Maine Class A state championship game win over Scarborough in overtime.

Kurtis Pelletier, a senior capped his last game as high school player in his home rink, the Androscoggin Bank Colisee,  by sending most of the 3500-plus fans homehappy as he scored 4:52 into the second overtime to the Blue Devils a 2-1 win over Scarborough and the Maine Class A state championship.

The goal started with Scarborough goaltender Peter O’Brien making back-to-back saves on Ryan Pomerleau and Pelletier. Pelletier corralled rebound from his initial for the wrap around goal. Drew St. Hilaire and Pomerleau had the assists.

It was his second goal of the game.

The win finished off a perfect season for the Blue Devils at 21-0.

“In overtime, I thought we had the better of them, but they had a couple of chances and Keegan (McLaughlin) came up big,” Lewiston coach Jamie Belleau said. “It’s playoff hockey, I told you (guys) this week this was going to be the hardest game and it was.”

The turning point of the game came early in the second overtime when Scarborough’s Sam Rumelhart’s shot on a partial breakaway went underneath McLaughlin’s pads and defenseman Sam Laroche acted as the last line of defense. The referees reviewed to see if the puck had crossed the line, it did not.

“I just wanted to lay my body out for the boys,” Laroche said of protecting the goal line. “It’s my last year playing, that’s pretty much it, I wasn’t going to lose it for the boys.”

Belleau used the review as a mini timeout.

“I think the (refs) wanted a break and I didn’t mind a break either to be honest with you,” Belleau said. “I saw when Keegan got up it was under his pads. I felt relatively confident that it wasn’t going to be called (a goal), but the refs that’s their discretion. I used it more as an opportunity to rest some guys.”

O’ Brien made 40 saves in the losing effort while McLaughlin made 25 saves.

For Scarborough coach Jake Brown, his team has nothing to hang their head about.

“I was really proud of the effort,” Brown said. “I thought we trusted each other and played together. That just shows you, your team and anyone watching what can happen if you stick together and play as a team.”

In the first period, it was Scarborough keeper O’Brien who was tested as the Blue Devils fired 15 shots on goal. He made a couple key saves and his cross bar helped him out as a Damon Bossie shot hit it square.

Lewiston was able to get one behind O’Brien as Kurtis Pelletier potted the opening goal in the middle of the first period with Ryan Pomerleau and Bossie notching the assists.

“He can get on my nerves but I love the kid,” Pomerleau said of Pelletier, his linemate. “It’s great, he gets the attention he deserves. He put in two this game, we only scored two, it’s unbelievable, he’s a great player.”

The Red Storm (15-5-1) only had two shots on goal in the opening frame on McLaughlin.

While the second period shots were 10-10, it was McLaughlin who saw more grade-A chances. He flashed the leather as he made a great glove save in the period.

Scarborough finally got a shot by him in the final two minutes of the middle frame as McLaughlin was a bit out of position as the puck squirted in the slot and John Valente shot the puck into the half open net.

It was a confidence booster heading into the final period.

“Especially when your third line scores a goal like that,” Brown said. “I definitely thought we had good energy after that goal and through that third period, I thought we played with good structure. We made it tough on them, they couldn’t for the most part stretch the ice. So, I thought we played a solid game.”

In the third period it was back and forth with both goalies making key saves. The Red Storm had the lone power play of the period. The Red Storm couldn’t capitalize.